Both Monday and Tuesday have seen nearly 1,000 new COVID cases be reported in Wisconsin, barely 3 weeks after the 7-day averages were down below 80 new cases. That's a very bad breakout, and indicates the virus is seeing exponential growth which needs to be tamped down now. Wednesday usually sees an important data release from the Wisconsin Department of Health Services which goes over how many new cases are being reported in each county of the state, and the trend of growth or decline. As you'd imagine, cases have gone up by a lot in the last 14 days, and it's hitting many corners of the state. 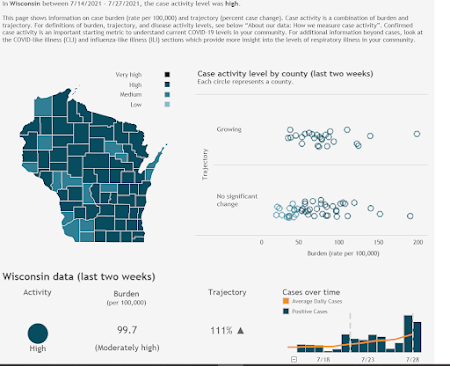 And that farthest-right dot on the "growing" category? Milwaukee County, which has had nearly 200 cases per 100,000 in the last 2 weeks. And the counties around Milwaukee are also seeing large amounts of new cases, with rates similar to or above the state rate of 99.7. New COVID cases per 100,000 people, July 14-27 Milwaukee Co. 198.7 Waukesha Co. 140.2 Ozaukee Co. 123.4 Racine Co. 111.2 Washington Co. 97.4 Huh, was there some kind of event going on in the Milwaukee area recently that had a bunch of people packed in without masks? 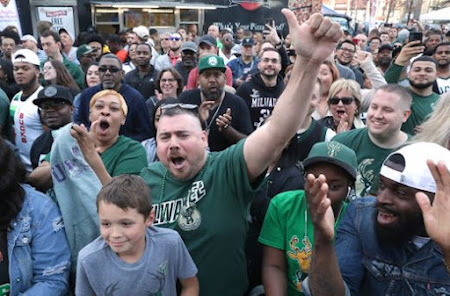 I'm not going to complain about the first Bucks title in 50 years in any way. But large masses of unmasked people traveling into a City where vax rates are lagging is a pretty obvious recipe for a COVID breakout, even if you are mitigating it by being outside. (In case you're asking, highly-vaxxed and mask=-recommending Dane County is at 83.6, but that's triple what it was 2 weeks ago). I don't think that there's any kind of appetite for shutdowns or even a mask mandate in most places, unless deaths and hospitalizations reach the point where ICUs are full and deaths are at 20-30 a day instead of the 1 a day we have today. But large, unmasked gatherings among people from many different communities are going to carry risks with them, and Wisconsin is going to have plenty of those in the coming weeks. Including the latest facility that's reopening this week.

I'm not changing my event-attending habits yet (hey, I did my job in distancing and vaxxing). But I'm definitely going to the mask more when I'm inside and/or crowded in, at least for now. And I do wonder if the latest COVID breakout keeps some Wisconsinites away from the large attractions that late July and August typically has in our state.
Posted by Jake formerly of the LP at 7:42:00 PM