Wisconsin jobs, workers came back in June. Even more than they normally would

After a big US jobs report for June and stories about labor shortages in Wisconsin, it made today’s statewide jobs numbers intriguing, to see if the data was matching up here. Sure enough, we also had gains in jobs and work force in Wisconsin last month, with good signs all around. 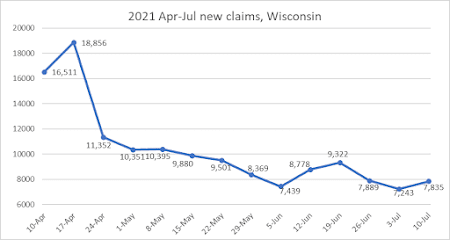 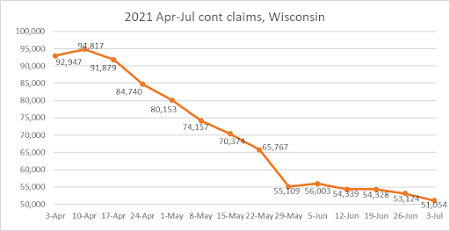 So if Wisconsin’s $300/week add-on is a disincentive for work, there’s nothing in the data that shows it. Likely because it’s been RW oligarch BS from the start. From my observations, seeing that the Bucks had to ship in workers from out of state to handle all of the extra business this week, and adding in the large amount of “help wanted” signs I’ve seen in places in both the 715 and 608 area codes this month, I’d say hiring in Wisconsin still has yet to catch up to the huge jump in demand sparked by COVID vaccinations and the Biden Boom. And in summary, it’s clear that Wisconsin ended the 2nd quarter of 2021 on a high note when it came to the jobs market. The question now becomes whether that momentum can keep up for the rest of the Summer with the increased work force and low unemployment rate. UW's Menzie Chinn has a good breakdown of the Wisconsin jobs situation at Econbrowser that gives a wider lens into these numbers.
Posted by Jake formerly of the LP at 7:13:00 PM