GOPs want infrastructure paid for. Yet offer no legit way to pay for it

As the US Senate plans to vote about the "roads and bridges" part of the infrastructure package tomorrow, check out this update from NBC's Sahil Kapur from today.

1. No reversing the Trump tax cuts

2. No tax hikes of any kind

Apparently, the GOPs on Capitol Hill want to take the Scott Walker approach of fixing the roads. 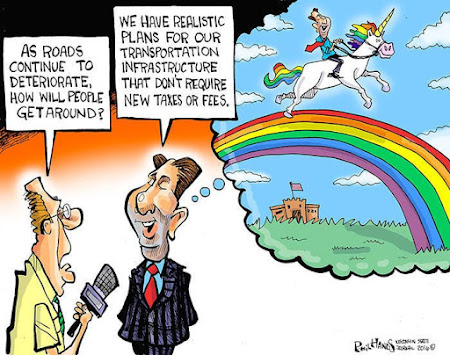 And let me guess, these same conservatives also are crying about inflation and the deficit, but they don't want to take realistic steps to pay for the infrastructure they allegedly support. Even though paying for infrastructure would lower the deficit and be a limiting factor on inflation. Contrast the GOP's "concerns" over deficit and inflation to what we see in the financial markets, where bond traders are willing to take a paltry rate of return of less than 1.2% over the next 10 years just to help finance the debt. And it's not inflation that tanked the stock market today, it's worries about a resurgence of COVID slowing down the economy. You know, the virus that GOPs don't want to deal with, despite the fact that it's the MAGA parts of America that are most likely to be seeing spikes in new cases tomorrow. Oh wait, I'm told by NBC's Kapur that the GOP Senator Rob Portman has a plan to pay for infrastructure.

Portman says they’re weighing savings from Medicare rebates, for e.g. I haven’t heard anyone say the deal’s off

So what is this Medicare Rebate? It's something that currently doesn't exist, and likely won't do much to help anyone.

That rule, which has not been implemented, would block drug manufacturers from giving percentage-based rebates to pharmacy benefit managers that manage drugs for insurance plans. Critics of the practice say the rebates encourage higher list prices and don’t reach patients at the pharmacy counter. Federal scorekeepers predicted insurers would increase premiums to account for the lost discounts, but that rule was delayed in court and has not taken effect.... Negotiators originally said the IRS enforcement provision would have cost $40 billion but generated $140 billion, netting $100 billion in revenue, although the CBO later tentatively estimated it would only net $60 billion in revenue, according to an aide familiar with the negotiations.

So any cost-savings the govt would get won't come close to paying for the infrastructure we need, and GOPs would do nothing to keep prices from going up, so Medicare recipients could pay more. Yeah, no sale on that scam. I guess reconciliation for everything, then. Oh well, GOPs. Guess you'll have to explain why you didn't vote for yet another thing the people want, and that Dems will get sole credit for delivering on.
Posted by Jake formerly of the LP at 7:28:00 PM