An actual job creator worth listening to

Unlike GOP job creators who spend more of their time with hands out asking for tax breaks and ways to crush competition, a real Wisconsin job creator got to meet President Obama last week and discuss how to grow business the old fashioned way...by creating a product people want. Oh, and since it was New Glarus Brewing's Deb Carey, they also got to talk about beer.

As for dealing with the fiscal cliff, Carey said she supports preserving the Bush-era tax cuts for the middle class, but believes it’s fair to return to Clinton-era rates for upper income-earners.

“I do think that that is a reasonable expectation,” Carey told me. “You’re ending a tax decrease. You’re just going back to what Clinton had done.”

Carey said the small business owners present Tuesday were asked what changes they’d like to see to help their businesses. She told the president more needs to be done to boost the pool of skilled trades workers. Her business has struggled for several years to find qualified workers, such as welders and workers who can maintain beer tanks and pumps.

I'd trust her word on how to get things done. New Glarus Brewing announced yet another expansion this September adding another $7 million expansion to the $75 million brewery building it opened up 4 years (here's a good rundown on how New Glarus built up to the new brewhouse). This expansion put the brewery in the great hilltop location it currently sits in. I highly recommend visiting it if you get a chance, and to go to their abbey underneath with the specialty beers. Today, New Glarus is now the largest craft brewer in the state, and top 30 nationwide, despite not selling the product outside of our home state. 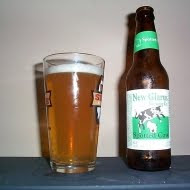 Now this is the way the system should work. Person makes a good product, expands the business, maybe with some help via SBA or other type of help from the government along the way, like New Glarus Brewing did with a TID district in its town, then they hire people to make more product, which expands demand for housing and other products in their community, and economic growth continues at a healthy level. I also find it interesting that New Glarus Brewing had a prominent Obama sign in front of its brewery, and actively opposed a GOP-backed law that changed beer wholesale licensing in Wisconsin.

And also note the comparison to another female-headed private business in South Central Wisconsin- Epic Systems, which has famously refused to deal with vendors that are part of Walker's buddies at Wisconsin Manufacturers and Commerce, and CEO Judy Faulkner has told fellow Epic workers at a conference that she supported the anti-Walker side during the Wisconsin Uprising. This is also while Epic has continued to expand in Verona, and now is nearing 6,000 employees and $1.2 billion in revenue, making it the largest private employer in Dane County.

Looks like the successful folks in Wisconsin business realize that good products, paying for good workers, and increasing demand is the way that things get done in the 21st Century. And the policies that encourage intelligence, innovation, and proper compensation to those who do good work are the way to go in the coming years. It sure beats the "race-to-the-bottom" losers like WMC and the supply-side oligarchs who care more about staying on top and grabbing increasing levels of profit over improving their product and expanding their businesses.

So why does our governor and state legislature seem hell-bent on following that losing right-wing strategy instead of listening to real job creators like Dan and Deb Carey, and Judy Faulkner? Hmmm?
Posted by Jake formerly of the LP at 6:24:00 PM