In a shocking development, Wisconsin had big job gains in November, with a seasonally-adjusted 10,600 jobs added for the month, wiping out most of the job losses that had accumulated since May. In fact, the only thing more shocking than the good job news was finding out that the greatest Badger ever has been living a double life as a $600 an hour call girl in Vegas in between motivational speeches (I find that story kinda cool, actually).

But the "good" jobs news also illustrates an interesting trend that has hit the state since the Great Recession hit 5 years ago, and has been continued to be true in the Age of Fitzwalkerstan. 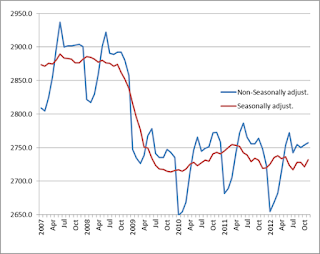 As you can see, the cold-weather months of October through February have generally done better than warm-weather months when it comes to seasonally-adjusted jobs figures, and seasonal adjustments seem to be a big reason why. On a raw-number (non-seasonally adjusted) basis, we usually start losing jobs after June, gain a few back in September and October as school starts up, and then in December and January, a lot of jobs go away, with the numbers slowly re-building back around February (2009 is the obvious exception with the economy falling apart).

And the seasonal adjustments is part of the reason behind these "huge" job gains in November, as the seasonally-adjusted gain is a lot more than the actual gain.

And the breakdown by category also reflects this

So nothing too great there, it just means there were less people hired that couldn't get laid off later. The one exception is the trade/ retail sector, which reflects the increased hiring for Holiday shopping season, and I'd give a whole lot more credit to a growing national economy (with GDP revised up to 3.1% growth for 3rd Quarter today) than anything going on particular to Wisconsin.

Now some of this may be silly to point out, and any seasonally-adjusted gain of 10,600 jobs in a month is good economic news. But it'll be interesting to see if the Walker Administration tries to hang its hat on these numbers, because here was Scotty this week telling the Appleton Post-Crescent that non-seasonally adjusted numbers are the ones that matter.

Walker took issue with a recent published report that the state has seen a net gain of just 25,000 jobs, saying “the raw data shows” that 86,000 jobs were created through June. (PolitiFact Wisconsin examined Walker’s job-numbers claim and rated it “Pants on Fire.”) And I concurred with PolitiFact's assessment

Since Walker said of these claims of Doyle's "No One Can Beat the World Champion Lies Jim Doyle Told Tuesday Night" and that they were worthy of entry to for the Burlington Liars' Club World Championship Liars' Competition, I trust that Walker will be submitting his own, even greater whoppers to the competition this year.

And you can bet one of them will involve the Walker folks claiming that Wisconsin is "turning the corner" and that it's finally "working." Given that November's job "gains" due to lower-than-normal layoffs are a sort of tallest midget contest, I wouldn't really bet on that.