3 simple stats should tell you all you need to know when it comes to figuring out if wages and wealth actually "trickle down."

The lead from a CNN article from this week lays it out.


Just four years after the worst shock to the economy since the Great Depression, U.S. corporate profits are stronger than ever.

In the third quarter, corporate earnings were $1.75 trillion, up 18.6% from a year ago, according to last week's gross domestic product report. That took after-tax profits to their greatest percentage of GDP in history.

But the record profits come at the same time that workers' wages have fallen to their lowest-ever share of GDP.

"That's how it works," said Robert Brusca, economist with FAO Research in New York, who said there is a natural tension between profits and the cost of labor. "If one gets bigger, the other gets smaller."

Profits accounted for 11.1% of the U.S. economy last quarter, compared with an average of 8% during the previous economic expansion. They fell as low as 4.6% of GDP during the recession.

In fact, a chart of profits shows that the time period of the Great Recession has been the ONLY time since the Bush tax cuts took effect on 2001 that corporate profits haven't been growing as a percentage of GDP. 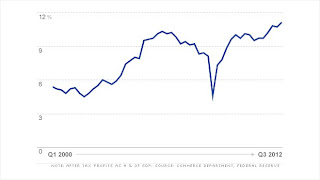 Now compare that to the wage side. I've popped a version of this chart on in the past, but now the GDP report has updated these numbers to show that wages as a % of GDP is even lower today, down to 43.5%. 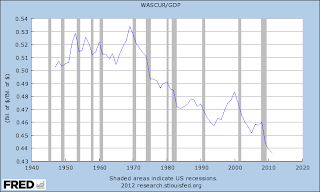 You can't help but notice that the only time in the last 40 years when this number has been on the way up has been in the 1990s, when the rich paid a higher marginal tax rate. It proves trickle-down to be absolutely false, as profits and wages are more likely to be hoarded when top tax rates are low, and it is only when the incentive to hoard is reduced through higher taxes that make higher pay and investment in a company a better bet over excessive profits and legialized gambling in the stock and real estate markets.

And it's not like workers aren't doing their part in cranking out more products, because they're as productive as ever. On Wednesday, it was revealed that non-farm productivity was up 2.9% in the third quarter of 2012, and total output was up by 4.2%, both of which were well above expectations. In a related note, unit labor costs were DOWN 1.9%, meaning it was cheaper to crank out the same products. Now if trickle-down and supply-side really worked, workers would be sharing in this increased productivity through higher wages, and both owner and worker would be doing fine, as profit margins would still be high.

So what do workers get for doing their job smarter and better than ever, because obviously they're not being rewarded out of the goodness of the boss's heart, (like they'd be in supply-side world)? Well, they get their wages threatened further when states like Michigan try to pass right-to-work-for-less legislation. Not only is this is a gutless move, because several of the "yes" votes are by lame-duck GOP legislators on their way out the door (probably to a lobbying firm backing corporate slime who support this), it's a pathetic reversal by Governor Rick Snyder.

In articles on the situation, Snyder previously said he wouldn't approve of such legislation, because it was so divisive, but then he changed his mind, basically approving of a race to the bottom by saying that Michigan needed to be "competitive" with neighboring Indiana, who approved of right-to-work-for-less last year. It's never enough with these corporate scum, is it? They're grabbing a record amount of profits while dropping wages to record lows while workers give them record levels of product, and it still isn't good enough.

These people won't stop till they get it all, and they'll try to buy off as many lowlife GOP politicians as they can to try to get there. I fear the message these greedheads got from November's election was to move as fast as they can on these things, because the people have already begun to turn on them and their puppets in legislatures around the country, so they may as well make one last big heist while they have a chance.

And it's going to get ugly as a result. 39% tax rates aren't enough for these guys, I'm starting to think 93% may be more like it.