A couple of reports over the last few days give some good benchmarks for where the state of Wisconsin stands compared to its neighbors as 2012 ends. And the news continues to be bad.

The first look was the state-by-state job reports from the BLS. And given that Wisconsin benefitted from seasonal adjustments and reported strong job gains in November, you'd think this would make the state look good compared to its Midwestern neighbors. But as a chart of the Midwest Fitzwalkerstani era shows, Wisconsin is the only state that has lost jobs in the BLS reports, and is far behind any other state in the area, as well as the country as a whole. 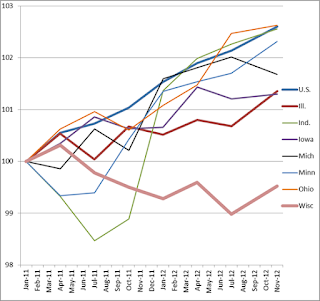 In fact, this chart shows that Wisconsin would have had to have gained 49,000 MORE JOBS JUST TO GET OUT OF LAST PLACE. That's a massive job hole to get out of, and it's not hard to pinpoint how we got there.

And the recently-released Philly Fed coincident index of states tells the same story. If you take this index and draw it back to Scott Walker's inaguration in January 2011, it tells a similarly ugly story. 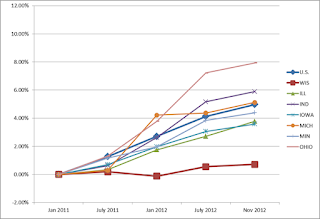 Even if Wisconsin's coincident index's had grown FIVE TIMES FASTER since the start of 2011, they'd still be bringing up the rear in the Midwest, and the U.S. as a whole has grown at a rate 6 times faster than the state of Wisconsin.

But let's give Gov. Walker the benefit of the doubt, and maybe all the upheaval since he dropped the bomb with Act 10 was holding businesses and consumers back. So let's look at how Wisconsin has done since the end of May, when Walker predicted the floodgates would open with job growth once the recall "uncertainty" was over.

So much for that. In fact, if you follow Walker's belief that businesses were "waiting and seeing" due to the recalls, I guess they decided they didn't want to be a part of a state that had Scott Walker and the WisGOPs running it.

(also note how Ohio has jumped ahead and stayed ahead of everyone in the Midwest. Guess restoring collective bargaining rights in the public sector didn't destroy their economy, did it?)

So we're still stuck in neutral in Wisconsin as the U.S. and the rest of the Midwest continues to advance. The sample size is large enough that you can't call it a fluke either. So as go intom 2013, let's see if our media catches on to the huge failure that has resulted from Scott Walker's regressive policies. And I'll make damn sure I'll do my part to keep it in front of your attention.

Maybe that critical mass will happen when Dem-run Minnesota passes Wisconsin some time next year for total jobs- there's only a 7,100-job difference between the 2 states right now. While Wisconsin football teams may pound Minnesota ones on the field (I anticipate that continuing this afternoon - little would make me happier than seeing the Pack break the Vikes' hearts and end their season), the Mud Ducks are beating our asses in the job front. Keep an eye on it as we go forward.