DOR says Walker will fall short...and they're being nice

In addition to the Wisconsin jobs numbers, the Wisconsin Department of Revenue released the Wisconsin Economic Outlook yesterday. And yet again we saw that Scott Walker's promise of bringing 250,000 jobs ain't going to come close to happening.

The DOR predicts about 118,000 private jobs will be added in Wisconsin from 2010-2014, less than half of 250,000. And even then, that number is charitable, because if you go inside the numbers and go to Page 9, it gives a rosy scenario of short-term Wisconsin job numbers that aren't holding up.

This looks especially bad when you look at the private sector Walker jobs gap. If Wisconsin had merely created jobs at the same pace as the rest of the country, we'd already be at 89,000 private sector jobs, and might have a shot at the 250,000 level by the end of 2014. 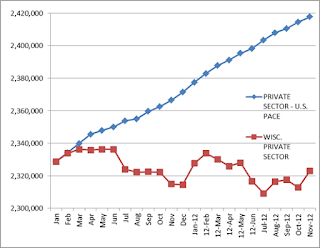 And the Wisconsin Economic Outlook tells a similar story of Wisconsin lagging when it comes to personal income. As mentioned previously, Wisconsin was outperforming its Midwestern rivals when it came to income growth when Walker took over, and now we have fallen behind both the Midwest, and the nation as a whole.

And again, the DOR gives optimistic figures for Wisconsin to get to that point. This week's state-by-state personal income stats show that Wisconsin would need to get an increase of 1.0% for the 4th quarter of 2012 just to reach the DOR's levels. And the state has only exceeded 1.0% for any quarter once since Act 10 took effect in March 2011- in 1st Quarter 2012, when income tax refunds and annual raises inflate the numbers. So if they fall short there, they'll be more likely to fall short in 2013 as well.

This is an important point to bring up, because when the LFB does their revenue estimates in the next month, they use the Wisconsin Economic Outlook and national economic trends to figure the appropriate levels of revenue growth (or decline) that is then used as a baseline for the budget. If Wisconsin is falling short in employment and incomes, even with the overly-positive forecasts from the DOR, it's going to be likely that the revenue figures also end up low, and Walker's already fraudulent claim of a balanced budget will come apart.

Keep your eyes on this one, and prepare to laugh when the news comes down later this winter.
Posted by Jake formerly of the LP at 6:37:00 PM