Fitz wants a tax cut. Problem - there's no money to give back

Now that Wisconsin Senate Majority Leader Scott Fitzgerald is trying to become Congressman Fitzgerald in the 2020 elections, he’s bringing out this GOP standby.

Senate Majority Leader Scott Fitzgerald is floating the possibility of a new tax cut as he launches a campaign for a seat in Congress representing the deeply conservative 5th Congressional District.

Fitzgerald said in an appearance Sunday on WISN (Channel 12) promoting his run for Congress that if the state has enough socked away he would like to put Wisconsin families "in a much better position" through a tax cut.

"I think we're going to be able to do it," Fitzgerald said.

State lawmakers are set to see $753 million more in tax revenue than previously anticipated. Democratic Gov. Tony Evers and one of the GOP leaders of Legislature's finance committee have said most if not all of the unexpected windfall should stay in the state's rainy-day fund. 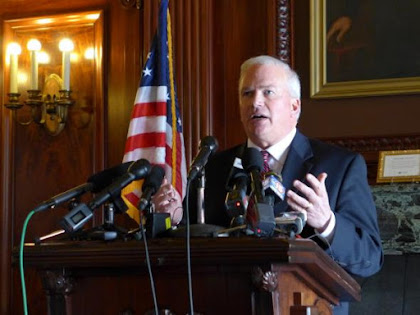 Tax cuts? AGAIN?
I read that, and it didn’t add up to me.

That's because the “$753 million more in tax revenue” was known in May, as the state budget was being deliberated. After those new revenue projections were given by the Legislative Fiscal Bureau, both the Legislature and Governor Evers promptly took care of that extra money, partly by giving income tax cuts that reduced revenues by a total of nearly $330 million over the next 2 years via the budget and a measure dealing with online sales.

In addition, more expenses were added to the budget in a variety of areas, which took care of most of the rest of the extra revenues. In fact, the State Budget gets rid of pretty much any extra money that might exist under those projections over the next 2 years (as shown on Page 41 of this document).

Then it gets worse for the next budget, which has a projected structural deficit of more than $1.1 billion. 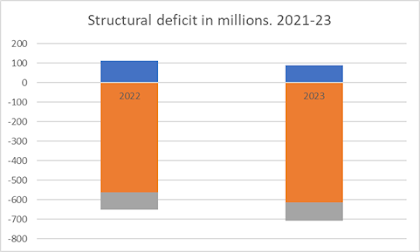 So there’s no extra money to be found, barring a major upside revenue boom (unlikely when the state has lost jobs in 2019 so far).

But wait, Fitz told “Up Front” that he thinks he has a source!

The state is expected to take in the additional revenue through the summer of 2021, giving lawmakers a small windfall as they work on the next state budget. Fitzgerald said Sunday he believes the rainy-day fund currently has $600 million in it.

Well, he’s right about the total, based on last month’s memo from the Legislative Fiscal Bureau.

As noted above, tax collections for 2018-19 are $75.5 million higher than the most recent estimate. Under s. 16.518 of the statutes, half of any excess of actual general fund tax collections in a fiscal year over the amount estimated at the time of enactment of the biennial budget must be deposited into the budget stabilization fund at the close of the fiscal year. Additionally, 2017 Act 368 directed that the amount of sales and use taxes collected in 2018-19 under the Wayfair decision be excluded from the calculation. Under these provisions, it is estimated that, for 2018-19, $321.7 million will be transferred to the budget stabilization fund….

The budget stabilization fund currently has a balance of $327.4 million. With the transfer shown here, that balance would increase to $649.1 million, plus whatever interest accrues to the fund.

Which is nice to have. But it’s a Rainy Day Fund, which is supposed to be used to maintain funding when budgets get tight when recessions lead to fewer revenues and more social spending needs.

So is Fitz saying he would blow through the state’s Rainy Day Fund to try to buy the votes of people who might vote in the WI-5 GOP primary? That’s a ridiculous and reckless move, especially given the precarious state of our economy these days. Sounds like our media should go back to Fitz and ask him to show us where he is finding this magic money that he would allegedly cut taxes with.

Because 5 minutes of research will tell you that there is no pot of money available to give back to taxpayers, at least not today. Which begs the real follow-up question – what services are getting reduced to come up with another GOP tax, and why would this make things any better in the state when 8 years of GOP tax cuts have left the state far behind in job growth during the Age of Fitzwalkerstan?
Posted by Jake formerly of the LP at 6:27:00 PM