Wisconsin job growth down under Trump/Walker, so WisGOP says the fault lies with...Evers?

Recently, we got further information from the "gold standard" Quarterly Census on Employment and Wages, dating up to March 2019. This report was part of the reason that US job growth was revised down by 514,000, as we got a fuller picture, and it also didn't fare quite well for our state.

The not-so-good news is that average weekly wages in manufacturing only went up by 1.7% (les than 50 cents an hour), and Wisconsin continues to be at the bottom for the Midwest in this category.

Other sectors weren't as fortunate as manufacturing. The QCEW said that only 852 construction jobs were added in Wisconsin for this time period vs 3,200 in the monthly reports, and over 1,000 mining jobs went away. In addition, the struggling retail and wholesale sector lost nearly 9,000 jobs in Wisconsin over these 12 months, with only Connecticut losing a higher proportion of retail/wholesale jobs.

That's a pretty bad way for the Age of Fitzwalkerstan to end in Wisconsin. But the WisGOPs that put us in that hole in early 2019 don't want to take responsibility for it. Take a look at this recent press release from the Republican Party of Wisconsin, its analysis of Wisconsin's WARN notices for mass layoffs, and its remarkable dishonesty.

Yesterday, it was reported that Wisconsin has already seen 8,142 layoffs since Governor Evers took office in January. This puts Wisconsin on pace to record nearly 12,000 mass layoffs in the first year of the Evers administration, which would be the highest number of such job losses over the past decade. As Empower Wisconsin reports, the policies and regulations being pushed by Gov. Evers’ administration are causing increasing concerns within the business community according to economy watchers.

“It didn’t even take a full year for Gov. Tony Evers’ failed far-left agenda to help put Wisconsin on pace for the worst job loss in nearly a decade,” said Republican Party of Wisconsin Executive Director Mark Jefferson in response to news. “If Gov. Evers wants to keep Wisconsin’s economy strong, he’ll work with Republicans instead of constantly pushing for tax hikes and big government bureaucracy that make it harder for companies to invest in jobs for hard-working families.”

Well sure, there have been more layoffs in Wisconsin in 2019, as Trump trade wars and other policies have especially hurt manufacturing in Wisconsin and other industrial Midwestern states.

But let's look at the WARN notices, and when these layoffs were announced, and see if there's a direct connection between Evers taking over and more layoffs happening in the state. And let's use July 1 as a cutoff point, as the budget Gov Evers signed didn't take effect until then.

You can see that the overwhelming amount of those mass layoffs were announced in the first 3 months of the year. And nearly 2,500 of those layoffs had to do with hedge funds wrecking a certain Wisconsin company, which caused this to be a common scene around the state. 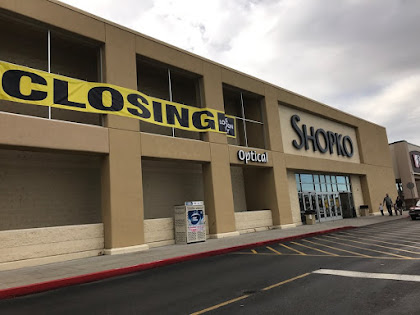 Now if the Wisconsin GOP wants to go after predatory hedge funds, they are welcome to. But I'm guessing they aren't down with that type of "big government bureaucracy", as it tends to hit their oligarch donors.

And what type of "Evers agenda" has even been put in place? Evers wanted to expand Medicaid and reverse a tax cut that manufacturers were given under Walker, but neither proposal got through the GOP-controlled Joint Finance Committee. Evers wanted to make 18-wheelers and other large trucks pay more in registration fees to pay for the extra damage they cause to roads, but the GOPs shot that down. So you'll pay more for your vehicle in Wisconsin, but the GOP donors at Schneider National and other trucking firms won't.

So we are still largely under Walker/WisGOP economic policies (if not their lack of oversight), and that was especially true for the early part of 2019, when most of these layoffs were announced. In fact, it's amazing duplicity where GOPs give a common theme of "Evers hasn't done anything as governor" and then blame his "changes" for bad things that are happening.

In addition, why doesn't WisGOP try to blame Evers for the state leading the nation in farm bankruptcies? They left that topic alone, because anyone with a clue knows the farm crisis in Wisconsin is due to Trump trade policies combined with WisGOP's support of CAFOs and other Big Ag companies. This has led to overproduction and a plummeting in prices for ag products, driving many Wisconsin family farmers out of business.

But this type of dishonesty is par for the course for WisGOPs. Scott Walker constantly contrasted the job growth that the state had in his tenure with the job losses while Jim Doyle was governor from 2007-2011, while conveniently ignoring Bush's Great Recession that hit while Doyle was Governor and the Obama Recovery that Walker benefitted from. And they never bring up that Walker held the state back from the much better recovery the rest of the nation had in the 2010s. 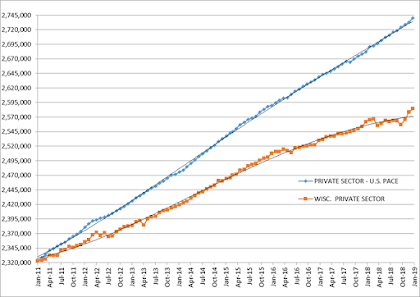 Look, I know WisGOPs are never going to operate in good faith and honest analysis, but this gives you an idea about the dishonesty and deflection that they're going to try to pull in the coming months and years. If our economy is stagnating and leading to a near-recessionary status for the state today, it's because of GOP policies in Madison and Washington.

While Evers and other Dems are trying to stop the bleeding and fix this damage, you can bet WisGOPs will try to push the blame onto them for a bad situation that Dems never had a hand in causing. This is who those amoral lowlifes are, and they are not worthy of debate on this topic.
Posted by Jake formerly of the LP at 11:31:00 AM