Wanted to pass along this note from this week's Census release on median household incomes for states and large communities.

The fuller briefing also has records of state income going back to 2005, and it shows that Wisconsin’s real median household income peaked in 2007 at a level similar to the U.S’s. Both areas fell as the Great Recession took hold afterwards, but the US has rebounded quicker over the last 6 years, to the point that Wisconsin’s household income was now more than $1,100 below the country’s level by the end of last year. 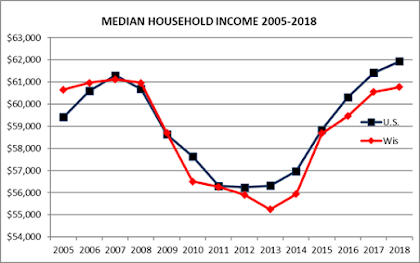 So unlike the country as a whole, Wisconsin's real median household income still has yet to rebound to where it was 12 years ago. And the gap has gotten notably larger in the last 3 years.

Go ahead WisGOP, take "credit" for Wisconsin's substandard performance since you started cutting taxes and gutting unions in 2011. It helps explain why Dems swept every statewide race last November, and why Trump isn't going to be able to run on a "strong economy" in the states that he needs most.
Posted by Jake formerly of the LP at 5:23:00 PM