While unemployment stayed low in Wisconsin for February, a huge jobs hole persists

Place of Residence Data: Wisconsin's labor force participation rate in February was 65.6, 4.2 percent higher than the national rate of 61.4 percent. Wisconsin's unemployment rate in February was 3.8 percent, while the national unemployment rate was 6.2 percent in the same month. • Place of Work Data: Wisconsin private-sector jobs declined by 1,000 in the month of February while total non-farm jobs declined by 4,500 over the same period.

On the household survey, unemployment stayed at its low 3.8% for the “good reason” – 2,500 more people re-enetering the work force, and 3,000 listing themselves as “employed.” That's good to hear, and we hope that trend continues. The payroll survey is not good, and not just because of Feburary's loss of jobs. What's not mentioned is that January's gains were also revised down by 4,500 jobs, so we're now 9,000 jobs below where we thought we were after the last report. That being said, much of February's loss of jobs can be explained by a seasonally-adjusted loss of 4,100 construction jobs. That likely reflects a sizable number of people not working outside during the survey week in mid-February, which happened as Wisconsin was under its worst cold snap in decades. So that seems like a temporary blip that will work itself out in March's report. Outside of the losses in construction and education-related services (due to a lack of semester hiring that usually happens in non-COVID years), almost every other sector had job gains in Wisconsin last month. They were mostly minor increases, but it beats the alternative). Overall, we need to remember that we are still far behind where we were in the pre-COVID World of February 2020, as Wisconsin has lost nearly 165,000 jobs over the 12 months measured since then, and we are basically in the same place we were in September. 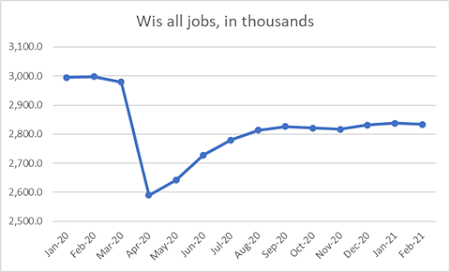 And if you dig into this week’s new unemployment claims report, we’ve found out that more Wisconsinites have been suffering through long-term unemployment than we knew. Take a look at these numbers for the PEUC program, which goes to people who have been out of work for 26+ weeks. 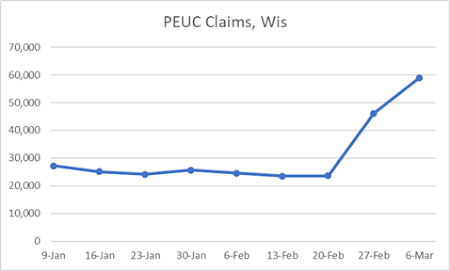 Not surprisingly, the jump in PEUC claims coincides with the Wisconsin Department of Workforce Development announcing that they could pay claims that happened after the program was renewed at the end of December. But it also means that there were likely more people out of work for 26+ weeks than what those mid-20s numbers in the first 2 months of 2021 would indicate. But despite these numbers showing that there is still a major jobs hole in Wisconsin, Assembly Speaker and PPP recipient Robbin’ Vos says what we really need to be doing is to force all of those unemployed people back into the work force to do….something.

Speaking this morning to a group of business owners on a @WisconsinMC forum, @SpeakerVos says unemployment/stimulus checks are encouraging people to stay out of the workforce.

"If you give them free money, they don't have the same incentive to work."

Hmmm, if only something could be done in Wisconsin to make work worthwhile to people – you know, like: 1. Raising the minimum wage above the poverty-inducing $7.25 an hour we have today
2. Expanding Medicaid to people barely above the poverty line
3. Expanding access and affordability for child care, or
4. Getting behind a mass vaccination effort. But of course, that’s not what Vos and his WMC puppetmasters want, because giving employees good pay and benefits means they aren’t as desperate for work, and therefore won’t accept the rock-bottom wages that WMC/WisGOP wants them to have to accept. I know a lot of us are optimistic these days with vaccinations continuing to pick up at the same time that weather is warming and Spring is trying to start in Wisconsin, and the worst of the COVID pandemic and its related job losses do seem to be over. But just because that's true, it doesn't mean that we are back to normal, or anything close to it. And for Robbin' Vos and WMC and the rest of GOP BubbleWorld to pretend that there isn't a lot of people still in need in this state is the type of willful ignorance that is insulting to those of us that are dealing with the still-subpar reality. Keep on grinding, folks.
Posted by Jake formerly of the LP at 5:47:00 PM