You may have noticed recent headlines pointing out that several US jobs reports in 2021 have been turning out much better than first reported.

“From June through Sep, the @BLS_gov reported it underestimated job growth by a cumulative 626k jobs — the largest underestimate…going back to 1979. If those revisions were themselves a jobs report, they’d be an absolute blockbuster” via @andrewvandam https://t.co/GDX7hmbnK0 pic.twitter.com/Sxk9shBcCt

Well, it looks like we’re going to see more upward revisions in the coming months, based on today’s release of the “gold standard” Quarterly Census of Employment and Wages (QCEW), which covered the June 2020-June 2021 time period. Let’s start with total US job growth, which comes in much higher than the monthly jobs reports have indicated. US job growth, June 2020-June 2021
Monthly jobs report +5.8%
QCEW release +6.7%
That 0.9% difference adds up, given that there were around 138 million jobs (seasonally-adjusted basis) in June 2020 – around 1.2 million jobs. And that 5.8% number in the monthly reports accounts for the revisions through June, which means the numbers are likely to go even higher when annual benchmarking comes around in February. Wisconsin also seems to be in line for more gains with benchmarking. We already had our unemployment rate revised down by 0.5% after more complete data came in, and it looks like our job growth was underestimated earlier in 2021 as well. Wisconsin job growth, June 2020-June 2021
Monthly jobs report +5.2%
QCEW release +5.8%
A 0.6% bump for June 2021 job growth would mean around an additional 16,000 jobs in Wisconsin, which meshes with the revised drop in unemployment, and would further shoot down the claims from the WMC crowd that expanded unemployment benefits were keeping Wisconsinites from looking for (and getting) jobs. That being said, I’ll also note that many of the job gains in Spring 2021 were in service industries that generally hire up as the weather warms, particularly bars, restaurants and hotels. So some of those QCEW gains may not be as high when the benchmarking comes out. But it’ll still probably be more helpful than hurtful. The Q2 2021 QCEW report is a key one in particular because Q2 2020 was the low point of US employment, given the lockdowns that happened as COVID first broke out that Spring. And both Wisconsin and the US still were well below the amount of jobs that existed in June 2019, indicating how deep that hole was, and how far we had to go. 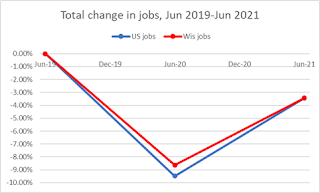 The monthly jobs reports have said that another 2.4 million jobs have been added nationwide since June, so that gap has shrunk further on the US side. But given that nearly 800,000 people are DEAD from a pandemic and that more have left the work force through either retirement or just not feeling it was worth it to keep working, getting those last 3-4 million jobs back may prove very hard to reach. We should adjust our expectations and policies accordingly when we look ahead to 2022. That being said, if the “gold standard” jobs report is any indication, we may have less of a hill to climb in both the US and Wisconsin, as job growth may have been better than the strong improvement that we already were aware of.
Posted by Jake formerly of the LP at 6:52:00 PM