While it's a 4-3 ruling for the most part, @judgehagedorn writes concurring opinion that takes issue with one component of majority decision. But he also backs the "least-change" approach in his opinion.

So the 4 WMC-bought "Justices" claim that they shouldn't do anything about gerrymandering, because voters should. But gerrymandering exists to make it unlikely that the voters hold the politicians accountable. It's disgustingly cynical, and insulting that GOPs think anyone is so stupid not to see what a bunch of self-sustaining garbage this is. So "least change" it is. Even though it's a standard that didn't exist until (like most things in GOP BubbleWorld) Republicans made it up to try to match the needs of Gerrymander 2.0. Well, good thing I made up maps based on "least change", which I discussed in this post. To review, here's what my "least change" Assembly map looked like. 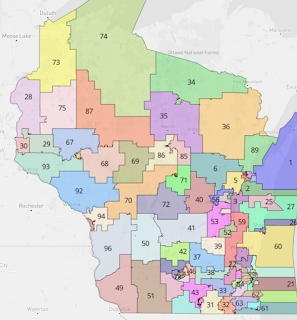 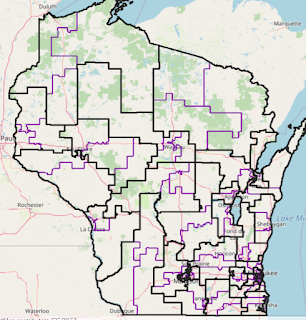 You can already see some differences in Northwest Wisconsin as well as in the districts east of Janesville (mine are a lot more like the current borders). But the major changes are in the Milwaukee area. For my map, I kept most of the 2010s base, which spread districts from Milwaukee County across into nearby WOW Counties. 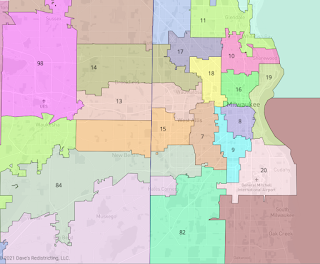 By comparison, take a look at WisGOP's Gerrymander 2.0 in the Milwaukee area. It makes a major change in combining districts 14 and 18 into Wauwatosa, while shoving 13 and 15 into Waukesha County to give State Sen Dale (Koo-Koo) Kooyenga a chance at holding onto a seat in an area that gets bluer by the year. 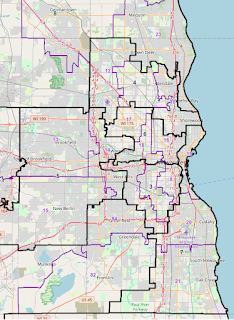 There you go Dems/others who want democracy returned to Wisconsin. Use as much as you wish in court. Disgusting stuff, but despair and giving up is not an option. Because the ultimate goal of the bad guys is to make the good guys give up because it's too much effort to overcome, which is how most Banana Republics and crooked 3rd World counties operate, when you think about it. But I'll be damned if I sit back and let those amoral weenies and trailer trash to rule over the Real Wisconsin, and have this state go down the drain for good. But it makes keeping Evers and other Dems in charge statewide all the more crucial in 2022.
Posted by Jake formerly of the LP at 7:55:00 PM