Retail sales up big in October - well above the "scary" rate of inflation.

Less than 2 weeks after a blowout jobs report, it was followed up by a strong retail sales report for October.

The solid report from the Commerce Department on Tuesday suggested high inflation was not yet dampening spending, even as worries about the rising cost of living sent consumer sentiment tumbling to a 10-year low in early November. Rising household wealth, thanks to a strong stock market and house prices, as well as massive savings and wage gains appear to be cushioning consumers against the highest annual inflation in three decades. "It's more important to look at what consumers do than what they say," said Gus Faucher, chief economist at PNC Financial in Pittsburgh, Pennsylvania. "They are concerned about higher inflation, but they are still in good shape and are continuing to spend." Retail sales jumped 1.7% last month, the largest gain since March, after rising 0.8% in September. It was the third straight monthly advance and topped economists' expectations for a 1.4% increase. Sales soared 16.3% year-on-year in October and are 21.4% above their pre-pandemic level.

That 1.7% increase in retail sales for October is nearly double the 0.9% increase in inflation that all of DC asnd Wall Street media freaked out about last week, and a 16.3% increase in sales over the last 12 months is a whole lot more than the 6.2% increase in CPI over the last year. Those numbers indicate we have a booming economy with strong demand driven by wage gains and a waning of COVID (in some parts of the country, anyway). So how does President Biden get such negative marks on the economy, driven by "inflation concerns"?

I despair of screaming this into the void, but voters are not primarily responding to inflation, they are responding to a massive, highly coordinated propaganda campaign across multiple media designed to freak them out about inflation.

One retail area in particular had lost a lot in recent months, but had a welcome bounce-back in October.

Sales were led by motor vehicles, with receipts at auto dealerships advancing 1.8% after gaining 1.2% in September. The rise reflected the first increase in unit sales in six months, as well as higher prices. The tight supply of automobiles because of a global semiconductor shortage is driving up prices.

Combined with a report of US auto production rising by 11%, down trends in the car sector on both the demand and supply sides have recently reversed. 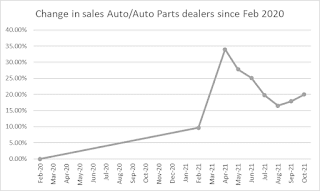 Even if you take out the strong auto sales and the inflation-driven rise in gasoline sales, retail sales were up 1.4% last month. Department stores, big box stores and Non-store retailers seemed to have a jump on that increased holiday spending, and there also was evidence of a switching back toward other sectors that benefitted the most from the change in spending habits that coincided with the first year of the pandemic. 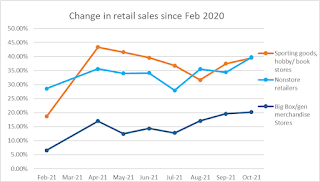 But one down spot for the month had spending at bars and restaurants continue to flatline after a tiny increase in September. 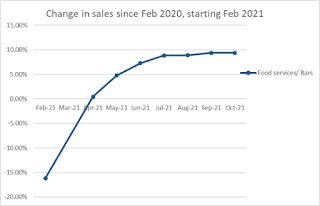 Not sure if that is COVID overhang or if it is reflective of the high level of quits and resulting worker shortage in that area of the economy. That being said, there may be a bright side as the weak sales may be helpful in an odd way, as it buys time for that industry to catch up on hiring. But let's not let the softness in food/drink service spending take away from the fact that overall this was a great sales report that goes along with a massive increase in jobs for October. So if COVID doesn’t derail things for the Holidays, it’s starting to look like we’re headed for big growth to wrap up 2021 – well beyond the hyped-up levels of inflation.
Posted by Jake formerly of the LP at 6:56:00 PM