I saw the link at the Wheeler report midday, which said the Wisconsin jobs report for October was out. I gave it my typical glance, and it seemed to be pretty straightforward.

The Department of Workforce Development (DWD) today released the U.S. Bureau of Labor Statistics (BLS) preliminary employment estimates for the month of October 2021. The data shows that Wisconsin's total non-farm jobs decreased by 1,000 in October 2021 when compared to September 2021 while Wisconsin's private-sector jobs increased by 2,000 in the month of October. Wisconsin's unemployment rate in October was 3.2 percent, down 0.2 percentage points from September's revised rate of 3.4 percent.

September's unemployment rate was revised downward significantly – this was due to a data distortion that was discovered by the BLS retrospectively in a neighboring state's data. The distortion affected data from all states in our region, including Wisconsin's. It is important to note that the drop in the unemployment rate was not due to any economic event; it was a series adjustment. Data from September 2021 through December 2021 should not be compared to data from January 2021 through August 2021. Data from January through August will be revised during the benchmarking process that occurs in [the following] January and February each year. The BLS website has additional information on the event.

I guess I’ll check that BLS website then! Let’s see what they say.

Well then! In Wisconsin's case, these adjustments both raised the number of people estimated to be working, and slightly lowered the amount of people in the work force. Revisions vs prior data Sept 2021, Wisconsin
Labor Force: -4,200
Employed: +11,900
Unemployed: -16,100
Unemployment rate: 3.4% vs 3.9% original (-0.5%) Well that changes the assessment of where we’re at, doesn’t it? No wonder why employers couldn’t find anyone to fill jobs this Summer – we were already at surplus employment. It also matches up with the significant decline in unemployment claims that has happened with since Spring. 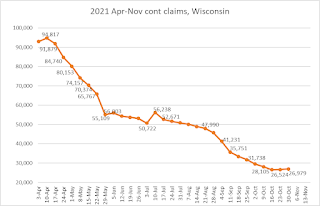 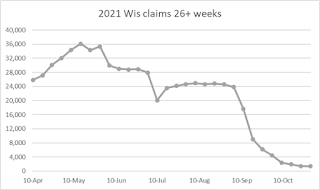 These revisions also show what a bunch of crap that WisGOP talking point was about how higher unemployment benefits were keeping people from searching for work. Especially since the labor force in Wisconsin declined in October – after the expanded benefits expired. It doesn’t look like the data revisions had as much of an effect on the payrolls side, which kind of makes sense since birth-death rate and other demo data isn’t that much of a factor when you’re asking businesses how many jobs they have. Revisions vs prior data Sept 2021, Wisconsin
Total jobs: +1,400
Private jobs: +500 And if we’re at 3.2% unemployment, there’s a real question as to how much more growth of jobs that we can get, especially as Winter hits and COVID goes back up in our state. So what we need to be doing is putting in supports for both wages and services to give workers options and lessen the chances that businesses backslide on what they offer workers. Because you know they’ll try to if given the chance. This shocking revision to 3.2% unemployment should be a front-page headline throughout the state, and sure seems to be a lot more important than 6.2% inflation these days. And maybe we should pound that reality into the heads of those in corporate media.

We are objectively in a historic jobs boom and yet everyone thinks the economy is bad because that's what the TV people have decided and keep saying. Does no one see how crazy that is? How much it challenges decades of conventional wisdom?