For 2021, Wis gained more jobs than ever....and still lagged most of America

I wanted to get a few thoughts in on the recent "gold standard" of jobs reports, the Quarterly Census of Employment and Wages, which has now released numbers through the end of 2021. It's a 2-sided report from Wisconsin's perspective. On one hand, the 2.4% of job gains is the best year of job growth that Wisconsin has seen in the 20 years that the QCEW has tracked the stat. The down side is that most of the nation grew more than twice as fast, with job growth just under 5.2%. The converse of those numbers is that the state didn't have as much of a hole to dig out of as other places. Wisconsin didn’t lose as many jobs as most states in 2020, both in the US (finishing 22nd) and in the Midwest (3rd out of 7 states). But the lack of loss also helps explain the lack of gains in 2021, when 5 out of the other 6 Midwest states brought back jobs at a faster rate than we did. Put it together, and Wisconsin was down 2.4% in terms of net job change as 2022 began, putting us smack dab in the middle of the Midwest. 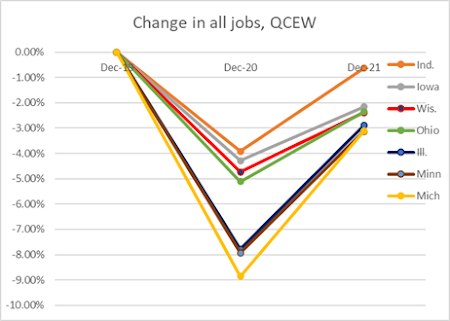 In the QCEW report, this means that we were around 69,000 jobs (-2.39%) below where we were at the end of 2019. That’s quite a bit less than the 91,000 jobs (-3.04%) that were reported to be lost over the same time period in the monthly jobs reports, which indicates that some of 2021’s numbers are likely to be revised higher. The same goes for the country as a whole, as we found out that the jobs market boomed even more than we thought it did last year. Change in jobs, monthly job reports vs QCEW
Dec 2020 – Dec 2021 Change
Monthly reports +4.73% (+6.74 million)
QCEW report +5.17% (+7.29 million) That’s another 550,000 of job gains that weren’t accounted for in the monthly jobs report, even after benchmarking added gains earlier this year. Pretty good stuff, although we will have to look to see at the next QCEW report to see if some of the continued torrid growth that we have continued to see in the jobs market might simply be “catching up” to the reality that there were a decent amount of jobs that weren’t reported before. Lastly, this report says that wage gains (via the average weekly wage) weren’t as massive as they were in 2020, but still built upon that big jump to leave weekly wages above where they were at the end of 2019. This is true in both the country as a whole, and in Wisconsin, though Wisconsin slightly lagged behind on the rate of growth. 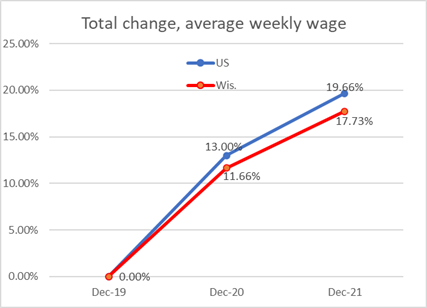 And before you start saying “BUT INFLATION”, let me note that the CPI rose by a total of 8.5% over those 2 years. Remember that 2020 had very little consumer inflation (1.3% from Dec 2019 to Dec 2020) so that year had bigtime real gains….if you still had a job (big if, I know). Some of those real wage gains were given back in 2021 (5.9% wage gains in US vs 7.1% inflation, and 5.4% in Wisconsin), but it was still quite a bit ahead overall as this year began. I understand that some of those wage gains from 2020 and 2021 have likely gone away as profiteering inflation stayed high in the first 1/3 of 2022. But because of the wage gains and stimulus checks and other assistance that happened in the 2 years prior, there was a lot of cushion built up, which helps explain why we are still seeing retail sales and manufacturing activity rising beyond the rate of inflation in recent months. And despite the higher gas prices, Americans are expected to take to the roads in much higher numbers for this Memorial Day weekend vs last year. So what the QCEW tells me is that our state still has jobs left to gain, but our 2.8% unemployment and relatively low population growth might mean there isn't much more to gain back. The monthly jobs reports have been positive so far in 2022 (up by nearly 30,000), but let's see if that growth in wages can start matching the US rate, and can keep workers ahead of the rising prices that we have seen in this year.
Posted by Jake formerly of the LP at 8:49:00 PM