Inflation not holding back consumers, manufacturers so far

While US consumer sentiment has dropped to its lowest levels in a decade as we get bombarded with higher gas prices and inflation stories all over the news, the American consumer sure isn’t acting depressed.

Consumers kept spending in April, with retail sales rising about in line with Wall Street expectations despite an ongoing surge in prices. Monthly sales rose 0.9% overall, just below the Dow Jones estimate for a 1% increase, the Commerce Department reported Tuesday. Excluding autos, sales increased 0.6%, which was better than the 0.4% estimate…. In addition to the solid showing in April, March’s spending was revised substantially higher, from the original estimate of a 0.5% increase to a 1.4% gain. Ex-autos sales were revised sharply higher as well, to a gain of 2.1% in March against an original 1.1%. On a year-over-year basis, sales were up 8.2% on the headline number, and 10.9% excluding autos.

That big March revision likely means that we will see the loss in US GDP not be so much when the revised GDP figures come out next week (and we get a look at 1st Quarter profits – speaking of inflation). The 0.9% increase in retail sales and (1.3% minus gasoline) is well above the 0.3% increase in the Consumer Price Index that we saw for April (and 0.6% in CPI minus energy). So despite how much Americans say that they’re stressed by inflation, the higher prices are not causing them to change their spending, and the overall economy keeps chugging along. Even one laggard in the retail sales report really wasn’t a bad sign to me, as a 0.2% (dollar) decrease in sales from food and beverage stores means should be more supply on the shelves (baby formula excluded), which should put a cap on the double-digit increases in food prices over the last year. On the flip side, spending at bars and restaurants had a big 2% leap in April following a 1.9% increase in March. You wouldn’t be seeing that if consumers were really freaked out over the state of the economy and fearing job loss. Spending in those establishments is up nearly 20% compared to this time last year, and has rocketed ahead after an Omicron-related swoon in December and January. 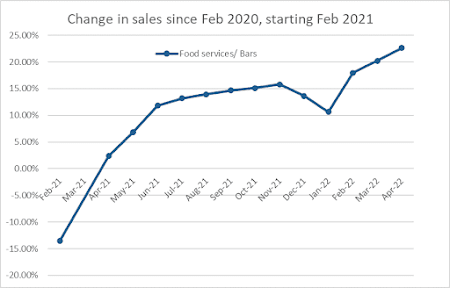 A couple of hours later, the Federal Reserve’s Industrial Production report showed that America’s factories weren’t being hurt by inflation, and in fact were picking up steam in April.

In April, total industrial production increased 1.1 percent—the fourth consecutive month of gains of 0.8 percent or greater—and manufacturing output rose 0.8 percent. The index for utilities moved up 2.4 percent, and the index for mining advanced 1.6 percent. At 105.6 percent of its 2017 average, total industrial production in April was 6.4 percent above its year-earlier level. Capacity utilization climbed to 79.0 percent, a rate that is 0.5 percentage point below its long-run (1972–2021) average…. Manufacturing output rose 0.8 percent in April and was 5.8 percent above its year-earlier level. The indexes for durable and nondurable manufacturing increased 1.1 percent and 0.3 percent, respectively, while the output of other manufacturing (publishing and logging) moved up 0.9 percent. Excluding an increase of 3.9 percent in the production of motor vehicles and parts, factory output rose 0.5 percent…. Capacity utilization for manufacturing increased 0.6 percentage point in April to 79.2 percent—the highest level since April 2007—and was above its long-run average by 1.1 percentage points. The operating rate for mining rose 1.1 percentage points to 80.1 percent, and the operating rate for utilities moved up 1.6 percentage points to 77.0 percent. Both rates remained well below their long-run averages.

This...does not look like an economy about to enter a recession, folks.

And those indexes are based on total output and capacity, not costs or prices. The highest manufacturing capacity in 15 years sure seems like a good spot to be in. It also goes along with an increase in manufacturing employment of 174,000 jobs for the first 4 months of 2022, and job growth averaging more than 40,000 a month over the last year. 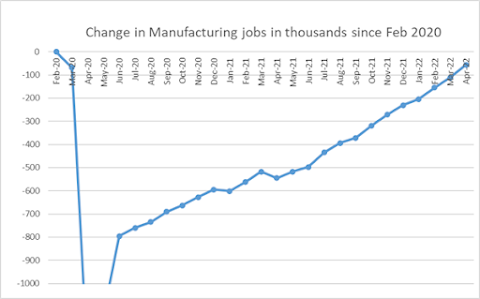 Yes, I know inflation is a pain. I don’t like the higher prices either and we need a stronger response against corporate greed and speculation (one of the main culprits, in my opinion). But American consumers aren’t slowing down, and it seems that April’s overall economic numbers are looking up. In addition, job and wage growth is continuing, especially at the bottom end of the job market (go look at what Summer jobs are fetching). So the “stagflation” talk seems to be Wall Street/GOP wishes over any type of reality, and I maintain that our biggest risk these days is not in rising prices (which should level off anyway, if supply and demand truly matter anymore). Instead, I worry about the Fed overshooting on rate hikes, causing a bigger slowdown than is needed and crashing assets in a way that spreads over into the Main Street economy with a significant effect on November’s elections. And yes, I am maintaining some cynicism on that, especially when the last guy (who gave the store away to the banksters while many Americans struggled to recover from the Great Recession) is dropping the "s" word without regard to reality in 2022 .

"There should be a period in the next year or two where growth is low, unemployment is at least up a little bit and inflation is still high,”... "So you could call that stagflation.”https://t.co/4BKtUlYm4F