Caught this press release come across from the Governor's Office, and found it worth looking into.

Madison – The Federal Reserve Bank of Philadelphia released its July coincident economic indexes for states today. Their data shows Wisconsin has had the third best economic growth in the nation. Additionally, this is the second consecutive month that Wisconsin’s growth has outpaced the national average.

Ah yes, the monthly Philly Fed report that I'd mentioned numerous times in the last couple of years. And in looking at the report itself, Wisconsin seems to be in an impressive place, as one of the few states in the dark green, indicating the strongest economic growth for the last 3 months. 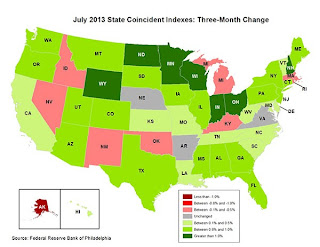 Now we know a big reason for these positive economic reports has to do with the big job numbers from May and June, which we know is largely due to increased seasonal hiring in part--time, low-wage jobs and a springback from the cold winter and spring that depressed warm-weather hiring in March and April. Not surprisingly, only measuring May, June and July will make things look pretty good, but when you look at the months preceding it, it's not as great.

And when you go back further, this bears itself out. Wisconsin may have 1.3% growth over the last 3 months in the Philly Fed index, but it's only 1.8% since the start of the year. Stretch this out to 12 months ago (right after the "uncertainty" of the Wisconsin recall ended), and we don't look very good at all.

EVEN THAT doesn't give the full story about the results of WisGOP policies in the Age of Fitzwalkerstan, because this chart shows that even with these strong results in recent months, Wisconsin still has had the worst economy in the Midwest since Scott Walker took office in January 2011, and would need to continue to massively outperform in the coming months just to get to the middle of the pack of its Midwestern peers. 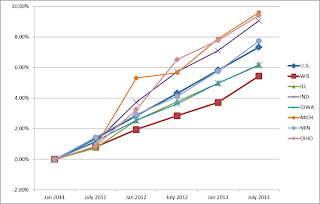 So let's take the Walker Admin's bragging with a grain a salt. Sure, the stats of the last 3 months are good news for Wisconsin's economy, and if it continues for another year, we can point back to the Spring of 2013 as the point where it started turning around. But given the failing record of Scott Walker and company in the 2 years before that, and his 8 years of failure in Milwaukee County, I'm calling the good numbers a seasonal fluke, and you're going to have show me continued growth as the weather cools off before the MacIver propagandists can even try to be serious when the claim "It's Working."