This week is WisGOP corruption- through the revolving door

A couple of Republican members of the State Assembly announced they were leaving their posts recently, and not surprisingly, both have a strong stench of payback for political favors surrounding the moves.

State Rep. Mark Honadel from South Milwaukee, the head sponsor of the giveaway Mining Bill to Gogebic Taconite, abruptly announced today that he would resign from the State Assembly to "pursue an opportunity in the private sector." Hmmm, I sure wonder if that private sector opportunity has anything to do with businesses that might have benefitting from this sellout of a mining bill, or lobbying his old buddies in the Legislature to keep the money funnel going to his contributors?

Nah, I'm sure there's no connection between this resignation and who benefitted from the bills this guy's had a hand in jamming through. Just like it's total coincidence that an overwhelming majority of GOP legislators ignored huge opposition from grassroots and tribal group, and decided to back the mining bill after millions of dollars of campaign donations from pro-mining interests flowed to WisGOP candidates over the last 3 years.

Also leaving is the Assembly's Number 2 guy, Scott Suder. He announced last week that he was resigning from the Assembly to double his salary as a Scott Walker appointee to the Public Service Commission, as an administrator with water and other utility regulation. Putting a GOP hack politician in charge of a PSC area? I'm sure there's no chance for quid pro quo in THAT gig, is there? I mean, it's not like we've seen another former GOP rep go to the DNR and give breaks to former campaign contributors, letting them to spread shit around Oconomowoc. Naw, things like that never happen. And yes, even though Suder was the guy who led the charge in ramming partisan garbage like Act 10, transvaginal ultrasounds and the mining bill through the Assembly, I'm sure he'll call it fair once he gets to the PSC, and do nothing to give Republicans and Republican-donating businesses the upper hand.

The Suder appointment was bad enough for Fitzwalkerstani corruption, but Scotty S is also a big part of a deeper mess that seems to be a payoff GOP/ Koch front groups with taxpayer dollars. Jason Stein and Paul A. Smith had the story this Sunday in the Journal-Sentinel involving the "United Sportsmen of Wisconsin," and it includes Suder giving away $500,000 in state funds to this group.

George Meyer, executive director of the Wisconsin Wildlife Federation, [praised] the goal of the grant but question[ed] the criteria attached to it. The wording of the budget motion prevented Meyer's federation from applying for the award.

"We aren't criticizing the purpose of this at all," said Meyer. "We think its purpose is important. But clearly it looks like it was put together for one group."...

In an interview, Suder said the grant would help to avert a "looming crisis" for hunting and fishing and ensure the future of those pastimes in the state. He said he talked to United Sportsmen and other groups about the grant but wasn't aware that United Sportsmen would include his former chief of staff, Luke Hilgemann, in the application as one of its educators.

Hmmm, so what is Luke Hilgemann doing now?

Hilgemann recently left his job overseeing and lobbying for the Wisconsin chapter of [Koch front group] Americans for Prosperity to take a job in Washington as the No. 2 executive for the group favoring conservative economic policies. 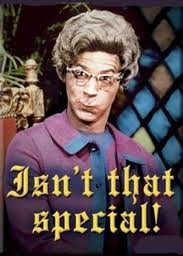 Amazing how these things work out in GOPland, isn't it?

I also wondered where I had heard of United Sportsmen of Wisconsin before, punched up the Google, and it linked to this great interview with Internet journalist Greg Palast. I then remember that I mentioned this article a few weeks before the November elections last year, but this part of the interview is worth repeating.

The Koch Operation, Americans for Prosperity, had its Chief set up a front called United Sportsmen of Wisconsin. United Sportsmen of Wisconsin, which appeared and then instantly vanished after the recall vote, using the Themis machine, were able to identify likely Democratic absentee voters in key recall areas. Because there were also votes, by the way, on legislatures. The Themis machine was able to get the United Sportsmen of Wisconsin to identify Democratic voters, send them letters saying here’s where you mail in your ballot, and here’s the deadline. The address was a phony, it was their own, and the date was after the legal date for submitting an absentee ballot. So, either way, you were fucked like a duck. The Sportsmen basically were hunting Democrats.

By the way, PR Watch points out that other members of the United Sportsmen of Wisconsin include NRA lobbyists, Tea Party members who organized pro-Walker rallies, and board members on the Wisconsin Coalition of Virtual School Families. Are these guys into hunter education, or another type of "[re-]education"? Hmmm?

To sum it up, Scott Suder arranged to have $500,000 of taxpayer dollars go in a mostly uncompetitive grant to a Koch electioneering group that admits they will mostly use the cash for "staff and consultants." And this grant is set up to continue for $450,000 in the next two-year budget, and the one after that, and for every budget until it is formally taken out. You thought Chicago had crooks in their government? Throwing taxpayer dollars to groups that seem to have no purpose other than promote GOP campaigns is Blago-like material, especially when you combine this with Suder's appointment to the PSC being announced right before this story hit.

Now, this article may seem like a lot of leg work to draw these connections, but it's not anything special at all - it just requires remembering a few details and dialing up some Internet searches. But for some reason, I can do this in 2 hours to post a blog item as a hobby, while "professional" Wisconsin journalists who are drawing a pretty good salary somehow can't. Now, the reason they can't do this boils down to 3 possibilities- 1. They're incompetent 2. They're gutless or 3. Their bosses restrict them from doing so. I'll leave it up to you to decide which of the 3 it is.

EDIT: State Rep. Nick Milroy had a great tweet which links to a poster from this event in October 2012 showing just what kind of "outdoors education" United Sportsmen of Wisconsin believes in. What a scam. 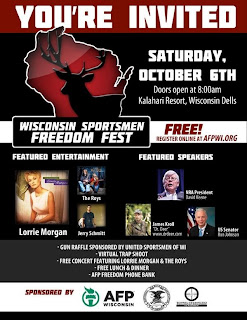