Another example of "freedom" due to Act 10

Got an email this weekend from my friend, who we'll call Amy. Amy had taught late-elementary and middle school for over a decade in Wisconsin, and the message said the following:

In a little over a week, I will not be returning to school like I have for as long as I can remember, but instead I will be embarking on a new adventure...as a [redacted on request] Training Instructor. I'll still be teaching, but I'll be training hospital staff on the applications. I'm incredibly excited about this new challenge and all the opportunities that the position offers, but I'm also feeling very sad to leave a profession that I admire and love. Despite my mixed emotions, I am sincerely ready to move on.

There is no coincidence that Amy decided to do so after teaching under Act 10 rules for 2 years. She'd had a taste of the "freedom" from union representation that the law had done, and she got cuts to her take-home pay for her and her family, which doesn't work well when you have a 3-year-old and 1-year-old at home. Amy also had to endure many unprompted rips from parents and their kids who had taken on the anti-teacher attitudes that Icki McKenna, Charlie Sykes and Mark Belling fed them through the airwaves. At a certain point, she felt it was time to be open to look for greener pastures, and the health systems training job opened up.

And props to the company for being wise enough to interview and hire Amy for this job. Now do I think she'd be training hospital staff if Act 10 and the "divide and conquer" governing strategy of Scott Walker and company never happened? Hell no. She'd be preparing to start another year of molding young minds and her school district would be reaping the fruits of a damn good teacher. Instead, she's moving on, and the district is going to have to scramble to find someone to replace her, and that teacher won't be nearly good enough nor familiar enough with the students to have her district end up better off for 2013-14. To boot, this district is in a relatively rural area, so good luck trying to recruit someone to pick up and move 30 miles from Madison to take over a classroom in a new area.

I don't blame Amy for doing what she did. I was a former teacher myself that chose to move on. I did it mostly to move back to Wisconsin and further my education, but I also eventually bumped my pay by more than 50%, and I didn't have a family to help support like she did.

As a report from last week shows, more teachers are being let go by districts in the post-Act 10 era, so there's not high job security like there was in the past. In addition, administrators are getting average raises of $4,000 at the expense of teachers, so why not jump before someone trumps up a charge and pushes you out? It proves again that if you take teachers for granted, and impose unrealistic expectations and rules upon them without giving them the respect and compensation they deserve, many of them will do what anyone else with talent would do in a job where they're treated like crap- they go somewhere where they won't be treated like crap.

At a certain point, you can't be so selfless that you end up poorer and angrier when you come home from your job, even if you do care for the kids and want to help them succeed. As a result of the teacher-bashing and Act 10 restrictions, a lot of teachers preceded Amy in leaving the profession, as the number of FTE teaching positions is down nearly 5% in Wisconsin in the last 5 years. 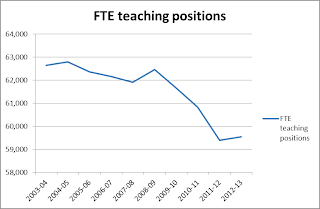 Amazing how the "market-based" anti-education losers forget this simple fact of economics- if you underpay and mistreat people with skills in demand, there will be a shortage of qualified candidates to make your product. I bet Amy's district won't be the only one facing a huge last-minute staffing mess that has to be fixed when classes begin in 2 weeks, and wait till you see the amount of school closures and tax increases that are coming for 2014 due to the continued flatlining in education funding.