I caught this quote from Governor Walker the other day, as he blew off Illinois Gov. Pat Quinn's calls for Wisconsin to push for marriage equality.

“Four years ago his unemployment rate was at 9 percent, ours was too. Ours is about two-and-a-half points lower, his is still at 9 percent,” Walker told reporters yesterday at State Fair Park following a cabinet meeting. “Of course he wants to talk about anything but unemployment and job creation.”

Well, let's look at that claim, shall we? Let's go to the BLS's site on state unemployment rates, and do a bit of comparing. We'll start from July 2008, which is when unemployment started picking up from the Great Recession, and we'll also note that the Wisconsin Legislature was under full Dem control from January 2009 to January 2011, and then under total GOP control starting in January 2011. 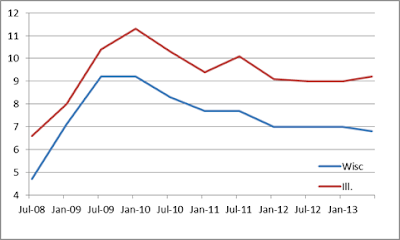 So 4 years ago, in January 2009, Wisconsin's unemployment rate was 7.1% and Illinois was at 8.0%. And that gap has generally grown from there.

So the gap between Illinois and Wisconsin grew more in the 24 months that Jim Doyle and the Dems ran Wisconsin than the 30 months we've had in the Age of Fitzwalkerstan since January 2011. So when it comes to the fact that Wisconsin has lower unemployment than Illinois, as Scotty's Republicans constantly told us last year "You didn't build that." I'm not even mentioning the increasing amount of Wisconsinites that have found work in Illinois and Minnesota in the last few years, which helps explain why Wisconsin's unemployment looks better than its lousy job creation stats would indicate (and Illinois is hurt by this same measure).

In addition, if Scotty tries to say the biggest reason we have better performance than Illinois is related to the FIBs chronically underfunded pensions, well Scotty, you didn't build our good position in that, either. The LAB released a report last month reiterating that the Wisconsin Retirement System's pensions remained fully funded. And once the stock market crash year of 2008 comes off of the five-year smoothing period (which it will after the next report), the funded status will look even better. Keep this in mind if you hear Walker and/or sqwauk radio types trying to say in the next few months "We're in danger of being Illinois/ Detroit and going broke," and therefore we'll investigate some kind of privatization scheme. It's bullshit, and it shouldn't take another state-funded report to shoot Scotty down on this lie.

So keep this context in mind as Walker and WisGOP continue to lie by omission in claiming that it's GOP policies that have put us in a better spot than our neighbors to the south. We were already doing better than the FIBs when Jim Doyle and the Dems ran the state, and in fact, our position was greatly improved under Dem control. The only reason this gap has maintained under Walker is because he hasn't had enough time to screw things up as badly as things are in Illinois....yet.