Caught this funny press release, in another example of how the Walker Administration has sometimes made it hard to tell the difference between the Department of Workforce Development, and the Friends of Scott Walker. Check out how the DWD tries to make it seem like "it's working", and how prosperity is right around the corner in Wisconsin.

“Initial and regular weekly claims have been declining for some time, but the initial claims total in the latest weekly report is especially welcome news,” DWD Secretary Reggie Newson said. “This is another sign of Wisconsin’s improving economy under Governor Walker’s leadership, and there is much more work to be done to create more jobs and prepare workers with the skills needed to fill those jobs.”

In addition, as of the end of July, the year-to-date average number of Wisconsin weekly initial Unemployment Insurance claims is at a 13-year low, at 10,778.

Sounds good, right? And on the surface it is, as claims have generally fallen each year in Wisconsin over the last 4 years. 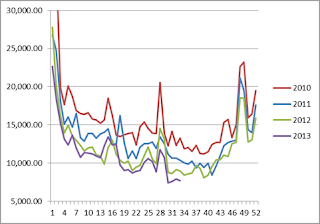 But you'll also notice that unemployment claims are around their lows for the year in August regardless of how bad the economy is. And once summer jobs start ending in the coming weeks, those numbers will go back up.

And the drop in unemployment claims in 2013 is hardly unusual in America. The U.S. continues to have new claims at their lowest levels since the Great Recession started, with last week's unadjusted claims figure of just over 279,000 the lowest since September 2007. So despite the way DWD portrays it, it's not a big deal that Wisconsin also is having its lowest level of unemployment claims since September '07, since the country as a whole has its fewest layoffs in 6 years.

This chart will also show this trend, as Wisconsin's year-over-year drop in unemployment claims is not much different than the nation's. A number below 0% means Wisconsin is doing better than the nation, while a number above 0% means we're falling behind. While we're not above 0, like we were earlier in the year, we're not much below 0% either. This is in stark contrast to the last year of the Jim Doyle/Dem regime, when Wisconsin's drop in claims was 10-20% more than the U.S.'s. 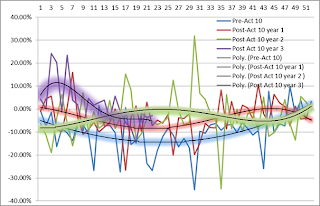 So once again, the Walker Administration is trying to take credit for a growing U.S. economy that continues to grow (at least for now), and tries to ignore the above-trend record of the Doyle/Dem regime, which put Wisconsin on a strong footing before the Age of Fitzwalkerstan began.
Posted by Jake formerly of the LP at 9:03:00 PM