Today featured the release of the state-by-state November jobs report from the U.S. Bureau of Labor Statistics. And it gives further evidence toward a theory I had about the November election. When you look at Wisconsin and the rest of the Rust Belt/Upper Midwest, you can see where "economic anxiety" could exist, and lead a previously Dem-leaning state to flip towards Donald Trump.

Remember that the five of the six Trump states that voted for Barack Obama in 2012 are states that have Big Ten schools in them. And with the exception of Michigan, if you compare their job creation record to how the rest of the country had been doing in the last year in comparison to those Obama-to-Trump states, you'll see that these places were badly lagging the rest of the US.

And even Michigan's strong numbers come with a "but", as they lost 8,300 private sector jobs in November. So while the nationwide numbers would indicate that the economy was still relatively going strong, those swingy states weren't doing as well (especially outside of big cities), and Trump was able to exploit those fears. That's because if you look at the 2 houses of the Legislature and the Governors' seats in those 5 Obama-to-Trump states, Republicans run 13 of those 15 institutions, and have at least 2 out of 3 in all of them. In fact, Republicans have pretty much run things in all of those states since the 2010 elections, and you can see things aren't really working out.

UW Professor Menzie Chinn mentioned another GOP-run economic failure- Kansas, who has faced chronic budget deficits since cutting taxes 4 years ago, and has lost 4,500 jobs over the last 12 months, while previously Dem-governed Missouri has gained 53,400. This identifies the opportunities for Dems, if the party ever grows a pair (yes, this is a big IF). Because the "economically anxious" members of the Midwestern Trump states should get their attention drawn to the fact that more progressive places like Minnesota (+1.33% private sector job growth last 12 months), the Pacific Coast (California, Washington and Oregon all have job growth of 2.3% or above), and Massachusetts (2.9% unemployment). All those states have Dem governors and/or Legislatures, and are kicking ass, and you'd think Dems might want to point these facts out, but somehow they don't seem too willing to do so, which probably is why they stay in the minority in far too many other states. 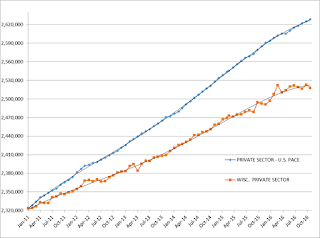 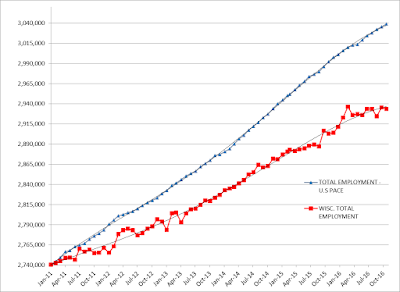 Honestly, I wonder if failed GOP economic policies at the state level were done with part of the intent being to anger the average dope in those states into wanting "change" away from the Obama years.

Actually, I don't wonder all that much. I think that in Wisconsin and other ALEC-owned states in the purple Midwest, stagnating the 2015 and 2016 economy in the face of a nationwide expansion was the intelligence of ALEC's design. And now they've got the opportunity to take that regressive mentality nationwide.