What magic can Walker pull to pay for all these promises?

Apparently our governor has noticed that internal polling indicates people don't like him and aren't buying his record over the last 6 years. So now he's donning a holiday sweater and trying to show voters that he is "responsible and caring Scott Walker", who will pay for education and turn away from the austerity that has slowed Wisconsin's economy.

Walker said increasing funding for K-12 education is his top priority in the budget.

He said he will increase the state-imposed limits on school district spending and then provide enough additional state aid to cover those increases, in order to keep property taxes lower than they were in 2010. He didn’t specify how much the increase would be, but said it would be lower than the $200 per pupil requested by the Department of Public Instruction.

Walker told the Associated Press public schools would see a “sizable increase” in state aid, and that he is specifically targeting rural schools for more money. 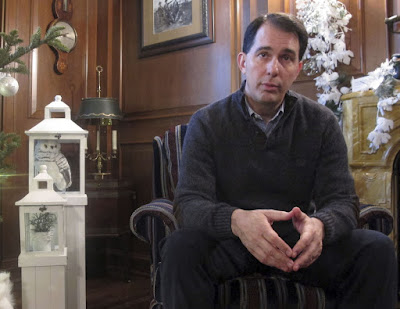 See, I'm one of you and not at all a cynical slimeball

Sounds great if true. But where is this extra money coming from? The Department of Public Instruction asked for $707 million in additional funding and property tax relief, but Walker's Department of Administration says that there are $588 million in requests that will have to be cut, or taxes raised in order to cover everything. And notice Walker's already backtracking on the request for more per-pupil aid, along with saying increases to K-12 education (not necessarily PUBLIC education, mind you) will be based on trying to reduce property taxes, not helping the schools improve services or pay their bills.

We continue with another form of Wisconsin education funding that also seems likely to be distorted, if not outright cut.

Those measures could include, he said, how many students enroll and graduate, how long it takes them to get a degree, and the kinds of jobs they get.

The obvious question is "who decides what those performance measures are?" I'm betting it's not higher ed administrators at the campuses and other academics. And note that research or new business incubators aren't part of Walker's performance measures. They'll likely be based on how they serve the needs of the state's business lobby and other Walker campaign contributors. You know, the same people who have been driving the train on the state's economic strategy the last six years...as the state has badly lagged the rest of the nation and most of our Midwestern neighbors.

It's also telling that Walker was making those statements early last week, before his administration released November's horrid tax revenue figures, which showed Wisconsin was on track to fall over $400 million short of LFB estimates in this fiscal year, and nearly $200 million below the DOA's estimates from last month, Those same estimates that had the $588 million 2017-19 deficit baked in, and given that we start the next budget from a lower amount of revenues, that $588 million gap will likely grow larger.

In addition, Walker also says he will try to include a sales tax holiday in the budget, a stupid gimmick that not only fails to help the economy, but will lower revenues by another $13 million. Walker also said in his round of interviews that he doesn't plan to have more than $500 million of bonding for Transportation, despite an $880 million deficit in the DOT's budget request.

So I wonder what Walker isn't telling the state media about. Where is the source of funding that is going to pay for all these promises, and/or what areas are going to be cut that Walker isn't talking about? Or is he going to count on the Trump Administration and GOP Congress to bail the state out with massive deficit spending? I'd LOVE to hear Scotty justify that move, because Walker said earlier this month that he'd be OK with a new US Constitutional Convention under Article V of the US Constitution....as long it is prevents the type of major federal spending that would bail out states.

"Some have said, 'Well if you do [have a Constitutional convention], doesn’t it open the floodgates to all sorts of wild ideas?' And the answer to that is no," Walker said. "The reason I support that is I believe, like our state and other states, that we should have a requirement to balance the budget that you can’t get around. I think it’s reasonable, particularly in Washington, to have term limits and to do other things that are responsible, and that if the Congress isn’t going to do it, I think it makes sense to have the call for an Article V Convention of the states."

So Walker is going to specifically demand Trump and the GOP Congress not go into a deficit to pay for roads and other infrastructure, right? Or is he going to follow the 21st Century GOP motto of "Our rules don't apply to us," and be cool with more federal money if it allows him to pay for road repairs and/or Medicaid? He can't get both. 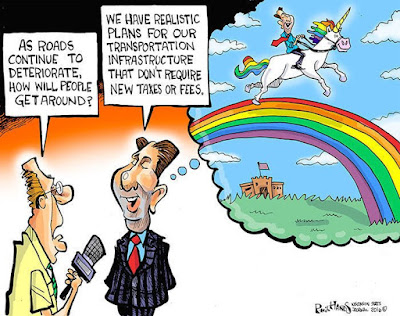 There's a second fun sidelight to this- Walker claims that states "have a requirement to balance the budget," but he doesn't mention that if he did DOT-style borrowing at the federal level, THAT WOULD COUNT AS A DEFICIT UNDER FEDERAL ACCOUNTING RULES. So Scotty isn't holding himself to the same standard that he wants to hold the federal government to. Does Governor Dropout not understand this difference, or is he trying to sneak one over on the rubes who still think this WisGOP crew is "fiscally responsible"?

Expect a lot more of this type of pretzel logic from our Governor as he tries to make himself acceptable for a third term. It's up to us to watch over the liars at the Capitol and the media stenographers who don't investigate these things, and remind them of Walker's past statements and the actual NUMBERS that show that Scotty's words won't become reality.