Property taxes down in 2016? Really Scotty?

I see our Governor is making the rounds again, trying to convince the media and the rubes that his policies are working for someone who isn’t rich and politically connected. This recent propaganda dump coincides with the release of this year’s property tax bills.

Gov. Scott Walker visited Waukesha on Tuesday, December 13th to highlight the savings he said taxpayers have seen in their property taxes since taking office.

Estimated property tax bills for the typical homeowner will be $116 lower this year (2016) than they were in 2010, according to the governor. Walker said that results in a six-year cumulative estimated savings of over $1,700 compared to the previous four-year trend. 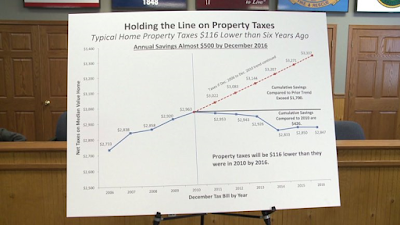 We’ll leave out the horrible job-creation record associated with Scott Walker's tenure in office, and instead concentrate on the property tax part here. That chart mostly matches the information that the Legislative Fiscal Bureau put up late last year, at least through 2015, although the dashed red line projecting 2006-2010’s property tax increases to continue the next 6 years is obvious spin. The Walker Administration’s chart also assumes a $3 drop in property taxes for this year, but I don’t see any other documents from 2016 that match this assumption from the Legislative Fiscal Bureau.

If they are counting on a drop, I think I know where it will come from, and it’s not related to Walker/WisGOP policies. If you go back to October, you might recall that the Joint Finance Committee allowed for a significant increase in the Lottery Tax Credit, a result of a large increase in Lotto sales that were helped by the weeks leading up to January’s $1.6 billion Powerball jackpot. So the Lottery Credit went up by 17.4% for the property tax bills that you’re probably getting right now.

I know in our case, the higher Lottery Credit knocked $23 off of our property tax bills compared to last year, and limited our overall increase to 0.6%, which is below our increased in assessed value, so that’s nice. What’s not as nice is that the lottery tax credit is projected to go down by 11.8% next year, a move that would raise my property tax by nearly $19. This is why I previously said that reducing this year’s lottery credit to “smooth out” these numbers could have been a better idea, but obviously the JFC members didn’t agree with me.

There is one Walker/WisGOP policy that’s new for 2016’s property taxes, and might keep a lid on what you have to pay. The School Levy Tax Credit was increased for this year, from $747.4 million statewide to $853.0 million starting with this year’s property tax bills. However, that didn’t come without a few tricks attached, as you’ll notice in the LFB summary of the School Levy Credit increase (it’s on Page 4 of this document).

In his original 2015-17 budget, Governor Walker wanted to skip paying the $105.6 million increase in that School Levy Credit until the 2016-17 fiscal year, have a “double payment” in this fiscal year to make up the difference (making the expenses reach $958.6 million), and then settle the number at $853 million for future years. Remarkably, the GOP-run Legislature took an even less responsible path, paying the credit in July of every year (so not paying it in FY 2015-16) but not having the “double payment” to get the credit payments on schedule. All so Walker and WisGOP could have a lame “We cut property taxes” talking point for this year.

By the way, Walker and the WisGOPs pulled a similar trick on delayed payments for their increase in per-pupil aid for K-12 public schools. They delayed a $126.8 million increase for last year until mid-July 2016, which means it wasn’t accounted for until Fiscal Year 2016-17. They followed with a “double payment” in this Fiscal Year which gets things back on track for future years.

Those two moves meant expenses paid for Fiscal Year 2015-16 were $232.4 million less than they should have been, which not only reveals the fraudulence of the $331.0 million “surplus” that we saw in the 2015-16 Annual Fiscal Report, but it also means that we are likely to see a second straight increase in the GAAP deficit when the Comprehensive Annual Fiscal Report comes out in the coming days (remember when Walker promised to balance the budget using GAAP?).

And going back to the property tax point, I’ll note that this year’s taxes are based on assessments made in the early part of 2016. Since then, home sales and property values have taken off in many parts of the state, as Walker’s buddies in the Wisconsin Realtors’ Association are more than happy to tell us. Watch for this mini-bubble to be reflected in next year’s assessments, which will drive up property taxes for many individuals around the state.

In addition to a lower Lottery Credit and inflated assessed property values, 2 other items point to higher property taxes showing up this time next year.

1.No additional increases in the School Levy Credit to lower taxes, like we’re seeing this year.
2.The passage of so many K-12 public school referendums last month- a direct result of Walker and WisGOP underfunding from the state level- likely will translate into more taxes for the 2017-18 school year.

It makes me almost want to laugh at Gov Walker’s pathetic attempts to sell to Wisconsinites that property taxes are being held under control, and that things are just fine. But let’s do a test of my 5-6 readers and see if that jibes with reality.

I’m guessing it ain’t going to match well with Walker’s “you’re better off and paying less!” claims
Posted by Jake formerly of the LP at 5:40:00 PM