Yesterday featured the release of the Quarterly Census of Employment and Wages from the US Bureau of Labor Statistics, and it was something I had anticipated to for a while, after the pre-release of Wisconsin’s figures last month. I figured that Wisconsin would look awful in this report, because our 1.02% increase in private sector jobs was the worst we’d seen for a quarter-end figure in 6 years, and it was well below the growth rate we saw in the US over that time period. You may remember this graph from a post I made few weeks back. 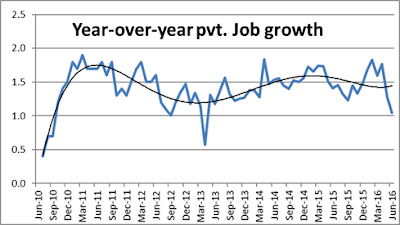 It turns out I was wrong on that assumption of awfulness, and some of that might help to explain the pro-Trump election results here in the Midwest.

Wisconsin ranked 30th in the nation in private sector job growth from June of 2015 through June of 2016 under the latest "gold standard" job numbers released Tuesday by the Bureau of Labor Statistics.

Private sector jobs grew here by roughly 1 percent over the 12-month period, trailing only Michigan and Indiana among Midwest states. The national growth rate was 1.6 percent.

Yes, we’re still in the bottom half of states in the nation for the 20th straight quarter under Scott Walker and the Wisconsin GOP, and that’s an unacceptable number. But it’s interesting (and a bit scary) to note that this actually put us in the top half of the Midwest over that same time period, and I'll even add in Pennsylvania to this list, due to their "blue to red" election status.

Gee, you wonder why some people in Big Ten country felt so desperate for a change in the economy (or were embittered by the stagnation) that they voted for a dimwitted lout like Donald fucking Trump in the (misguided) hope that somehow he could turn the trend around?

This helps to explain why these people seemed to ignore the reality that the US economy as a whole was doing well, because in their immediate world, things probably weren’t so hot. Whether that’s by GOP/ALEC sabotage at the state level or a larger issue where national job losses in manufacturing and other industries hit harder in the Midwest than most, I'll leave that up to you. But you can see where a lot of people in the Midwest had good reason to feel left out of the prosperity that seemed to be prevalent in much of the rest of the country.

In Wisconsin, the disparity was obvious within the state as well. While a few select areas were practically booming (Dane County gained over 8.500 private sector jobs, and Kenosha County had a 7.8% jump nearing 4,000), over 1/3 of the state’s counties lost private sector jobs between June 2015 and June 2016. And many of those counties were in the less-educated and more rural parts of the state that shifted hard for Donald Trump in this last election.

However, if you spread the state stats out over the last 5 years, Wisconsin resumes its now-usual spot as a Midwestern laggard, as we started out behind in the early 2010s, and haven’t gotten any better. Only the near-zero job growth in Illinois and Iowa in the last year is the only reason Wisconsin is able to stay out of the cellar for our part of the country in the Age of Fitzwalkerstan. 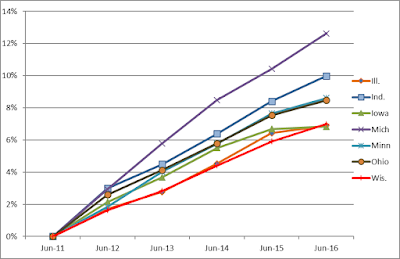 Which goes back something I wondered about in the wake of the Election- when do the small-town Wisconsinites unhappy over the lack of job opportunities turn their legitimate anger onto the Republicans that have been running the state (into the ground) for nearly 6 years? And will they have the guts to shake off their tribalism and self-centeredness to identify the real enemy, and throw those bums out? I go back and forth between hope, anger, and disgust in my predictions on the answer to those questions.
Posted by Jake formerly of the LP at 6:38:00 PM