This week featured the new estimates by the US Census Bureau of state populations for 2016. And two states neighboring Wisconsin stood out from the rest of the Midwest for what happened to them in regards to population in 2016 (for this post, I'll add Pennsylvania to the other 7 Midwestern states, given Pennsylvania's "Obama-to-Trump status" in 2016).

Minnesota continued to outpace the rest of the Midwest, adding 37,517 people, nearly twice as much as the next closest Midwestern state, and it nearly matched the 0.70% rate that the rest of the country's population grew at. On the flip side, Illinois lost over 37,500 residents, as people left the state in droves in 2016. 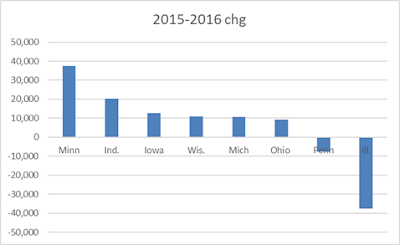 That Illinois figure includes an amazing stat where 114,144 more FIBs left the state to head to another part of America vs the number of Americans who moved into Illinois. All Midwestern states lost in this statistic (not surprising, given the colder weather and generally slower economy compared to the rest of the country), but Illinois lost more than twice as many people as any other state in the Midwest, and only New York lost more nationwide. Minnesota came the closest to breaking even, and it seems noteworthy that Wisconsin lost 7 times as many people last year as our similar-population neighbors to the west.

When you look at the Midwest's population changes since the last Census in 2010, a similar pattern emerges where Minnesota is far and away the fastest-growing Midwest state, while Illinois has actually lost people, and Wisconsin is noticeably slower than the US rate as well as the states to our west, but in the middle of the road for our part of the country. And it also seems noteworthy that 2010 is when many of these states elected Republican governors and installed Republican legislatures, which have largely stayed in power since then...with the notable exceptions of Minnesota and Illinois. 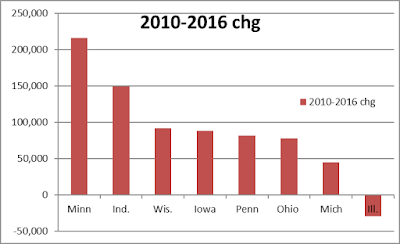 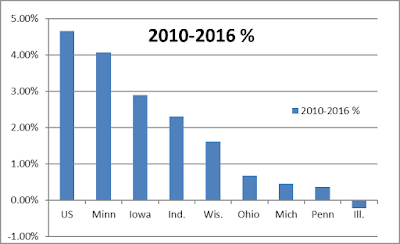 Lastly, the lack of population growth in the Midwest likely means that our part of the country is going to lose more representation in Congress and in the Electoral College in a few years. Kimball Brace at Election Data Services has a neat set of projections for the 2020 Census, and the reapportionments that would happen as a result. There are 3 pictures shown, 1 as it stands today in 2016, and then 2 using the 1-year and 6-year trends we see above, and the upshot is that states like Texas, Florida, Colorado and Oregon are poised to gain seats (in fact, Brace says Texas might gain as many as 4 seats after 2020), while most of the Midwest is projected to lose.

Given Minnesota's relatively strong population growth, it looks odd to see them potentially losing a seat in Congress. But that's because Minnesota barely hung onto their 8th seat in the last Census, and enough states have grown faster to move ahead of them on the "list" that determines which states gets seats. By comparison, Wisconsin is projected to barely hang onto their 8th seat in 2020, but obviously there are 4 years left to go before the Census happens, and Brace says it wouldn't take much of a change in trend to see Wisconsin end up losing in a few years.

Wisconsin – The long-term trend methodology shows Wisconsin keeping it’s 8th congressional district, but with only 72,639 people to spare. It captured seat #433, just two away from the 435 cut-off point.

That means that if other states grow even faster, or Wisconsin slows down even more, then we could well lose out. And with regressive social policy, a lagging economy and cold weather driving people away from Fitzwalkerstan, the possibility of Wisconsin losing Congressional representation is in play.

And there is also an economic problem with Wisconsin's low growth- it's hard to have an economy grow when people are leaving and/or aging and not being replaced. We're not a full-fledged disaster like Illinois, but we are clearly being lapped by the rest of the country as a destination for talent to locate in, and that's not a trend I see changing as long as Gov Dropout is in charge.