While there's a lot of directions your attention may be pulled these days, I want to mention that we got our first look at 4th Quarter 2017 GDP yesterday. And as the Bureau of Economic Analysis told us, GDP growth is still going well, at 2.6% for Q4 2017, and 2.3% for full-year 2017.


Real gross domestic product (GDP) increased at an annual rate of 2.6 percent in the fourth quarter of 2017 (table 1), according to the "advance" estimate released by the Bureau of Economic Analysis. In the third quarter, real GDP increased 3.2 percent….

In fact, if you look at this chart from James Hamilton at Econbrowser, you'll see we likely would have broken past 3% except for a small drop in inventories and a significant increase in imports, which reflects the pickup in consumption. 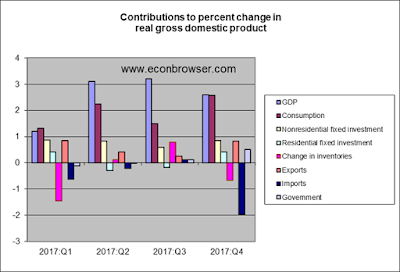 In looking at the income side of things, it looks like that picked up as well at the end of the Q4, but that those gains were immediately spent away, leading to a lower savings rate.

This is a good thing for the overall economy, as consumer spending is around 70% of GDP. But that drop in saving to pre-Great Recession levels should be flashing big warning signs to you once these stock market and housing bubbles pop.

In fact, while real (inflation-adjusted) disposable incomes did rise in 2017, the BEA says that the growth level actually declined in 2017 (1.21%) vs 2016 (1.38%). Still beats a decline, but it's really a continuation of the growth trend we had before Donald Trump's election.

And in looking at the full-year GDP estimates, we see a similar pattern. 2017 was right in line with the growth rates we saw in the previous 7 years of the Obama Recovery, although it was a nice rebound from 2016's slowdown.

Of course, that reality wasn't what people in the Faux News bubble were hearing yesterday.

VARNEY: We had 8 years of 2% growth. Now we’ve started out in the first year under Trump with 3% growth. Capitalism works. pic.twitter.com/JuHDb7r58I

The question now becomes whether the pickup in consumer spending continues for 2018, and if it's accompanied with real wage growth. I find myself skeptical of that, especially as we see continual stories of corporations using their tax cuts to buy back stocks and boost dividends, along with using those incentives to cut jobs (like we're seeing with Kimberly-Clark here in Wisconsin).

So while the economy ended 2017 on a strong note for topline GDP, sooner than later we need to see real people benefit from that. Or else the story of 2018 will be that GDP growth and standards of living are heading down, once the tax cut buzz wears off.
Posted by Jake formerly of the LP at 9:13:00 AM