This bit of news from the morning isn’t exactly Making America Great Again.


Harley-Davidson Inc (HOG.N) said on Monday it would move production of motorcycles shipped to the European Union from the United States to its international facilities and forecast the trading bloc's retaliatory tariffs would cost the company $90 million to $100 million a year.

The shift in production is an unintended consequence of U.S. President Donald Trump's administration imposing tariffs on European steel and aluminum early this month, a move designed to protect U.S. jobs.

In response to the U.S. tariffs, the European Union began charging import duties of 25 percent on a range of U.S. products including big motorcycles like Harley's on June 22.

In a regulatory filing on Monday, the Milwaukee, Wisconsin-based company said the retaliatory duties would result in an incremental cost of about $2,200 per average motorcycle exported from the United States to the European Union, but it would not raise retail or wholesale prices for its dealers to cover the costs of the tariffs.

The company expects the tariffs to result in incremental costs of $30 million to $45 million for the rest of 2018, the filing said.

In other words, it looks like the EU has actually succeeded in using tariffs to encourage companies to make their products in their part of the world, while the US is losing both jobs AND paying higher prices for various products. That’s what you MAGA types were counting on in 2016, right?

Even more darkly funny is that Harley is one of Trump’s favorite companies to use in his “America first” theme. Like this photo op from the first weeks of Trump’s time in office.

Great meeting with @harleydavidson executives from Milwaukee, Wisconsin at the @WhiteHouse. pic.twitter.com/7Spcmh6guM

It’s worth noting that meeting came two days after this fiasco.

President Donald Trump will not head to Milwaukee for a previously scheduled visit of a Harley-Davidson factory after the company decided it wasn't comfortable hosting him amid planned protests, an administration official said Tuesday [January 29, 2017].

Trump had been scheduled to tour the factory Thursday, where he also planned to sign executive orders related to American manufacturing.

The visit had not been publicly announced, but White House staffers were already on the ground in Milwaukee setting up for Trump's planned visit to the factory on Thursday.

White House spokeswoman Stephanie Grisham confirmed Trump is not expected to go to Milwaukee on Thursday. 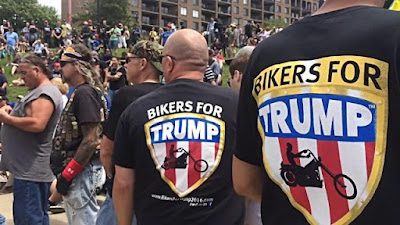 Last year’s aborted Trump trip to Harley-Davidson seems relevant as Trump is scheduled to do a similar photo-op and fly-in on Thursday at the Foxconn site in Racine County. At the event, Trump will hang out with Governor Scott Walker, who uses a Harley as a campaign prop to seem like an everyday human being, and Foxconn executives, in an attempt to convince people Trump is returning manufacturing to the US.

That photo op event comes at another time when Trump and his administration are enforcing other cruel anti-immigration policies. Even before last week’s revelations about atrocities at the border and separations of families, there were already protests planned for that Trump/Walker/Foxconn event based on the boondoggle and environmental damage of the Fox-con. Those protests seem all the more relevant now that Foxconn execs are admitting that the project will create far less than the tens of thousands of jobs that were promised last year.

Foxconn's Terry Gou says the company plans to replace 80% of workers with robots in 5-10 years.

Now add the hated policies of baby jails, concentration camps, and other family separations to go along with the Trump tariffs making Harley send jobs overseas? You’ve got a lot more reasons for people to show up and let Trump, Walker and Foxconn execs hear them for acting against the public's wishes. I’ll put even money that Trump doesn’t make it to the groundbreaking this week, likely at the insistence of the Walker Administration, who is already losing politically on the Fox-con.

Well, wait a minute. There is a massive fundraiser in the Milwaukee area that Trump is supposed to be at, with money going to a Trump SuperPAC and the RNC. We all know Scotty won’t walk away from a chance to grab a piece of that donor money, especially before Saturday’s 2nd Quarter fundraising deadline. So you can bet the Donald will be asked to show up for that one (note that the article won’t reveal where that fundraiser is, other than it’s being hosted by Milwaukee oligarch Ted Kellner).

Buckle up. It feels like there’s a lot to develop in the next few days as these immigration and trade policies intertwine in Wisconsin. Let’s see if the GOPs keep doubling down on their reckless, cruel and failing policies, and pour gasoline on these embers of anger.
Posted by Jake formerly of the LP at 5:13:00 PM