Farm bill cuts of SNAP another example of GOP cruelty, And economic stupidity

After many weeks of debate and an embarrassing defeat in May, the GOP-controlled House of Representatives finally got a Farm Bill passed this week (it went through by the bare minimum, 213-211, with 4 members not voting). Notably, the bill includes new restrictions on people who want to receive food stamps.

The measure restricts who is eligible to receive aid and also requires millions of Americans who receive food through government assistance to work 20 hours per week, enroll in job training programs or be cut off from those benefits.

Democrats have been relentless in their opposition to the changes to SNAP, arguing the new provisions are cruel and will cause food insecurity for millions of Americans…

"This bill includes critical reforms to nutrition benefits that close the skills gap, better equip our workforce, and encourage people to move from welfare to work, so more Americans have the opportunity to tap into the economic prosperity we're seeing right now."

Sooo punchable. Like this guy's ever had a real job

The Center on Budget and Policy Priorities have followed this farm bill as it has tried to worm its way through Congress, and notes that Ryan’s claims are absurd, as many of the people harmed by this farm bill are children and people WHO ARE ALREADY WORKING.


Among those likely to lose food assistance are a considerable number of working people — including parents and older workers — who have low-wage jobs such as home health aides or cashiers and often face fluctuating hours and bouts of temporary unemployment that could put their SNAP benefits at risk. In addition, substantial numbers of people with serious physical or mental health conditions, as well as many caregivers, may struggle either to meet the monthly work-hours requirement or to provide sufficient documentation to prove they qualify for an exemption — and, consequently, may be at risk of losing nutrition assistance.

While the requirements focus on adults, children, too, will be harmed, because when parents lose SNAP, there are fewer resources available for food for the family. Going forward with policies that reduce food assistance to poor children flies in the face of research showing that SNAP not only reduces short-term hardship but has a positive effect on children’s long-term health and educational outcomes.

Though the bill’s proponents say they want to encourage work among more SNAP recipients, the bill is likely to leave many people who face substantial barriers to work with neither earnings nor food assistance. Most people who participate in SNAP are workers — most work while receiving SNAP, while many others are between jobs. The large majority of those who aren’t working are caring for someone else, suffering from a disability or chronic health condition that limits their ability to work, or going to school

Because the upper limits of SNAP assistance get cut off for most families at 130% of poverty in the bill, and because it doesn’t allow states to go above those limits, it becomes an especially harsh hit in Wisconsin. The state currently offers benefits up to 200% of poverty (which equates to an annual income of just over $24,000 a year for a single person, or a little less than $41,000 for a single parent with two children).

A Legislative Fiscal Bureau memo from last month showed that over 75,000 Wisconsinites would lose SNAP benefits under this Farm Bill, including more than 23,000 children. Even more notable are the areas who would have the largest percentage of SNAP recipients losing their benefits – HINT, it’s not large cities filled with THOSE PEOPLE. I’ll also include the member of Congress who “represents” those counties.

In addition, as the CBPP noted, having such strict work requirements limits the options of many individuals, and forces them to choose between spending more time taking care of their family members (either children or vulnerable adults) and losing benefits, or being stuck at a menial job for more hours of the week.

The Wisconsin Budget Project added at the time that having such a strict cut-off at 130% of poverty to receive benefits flies in the face of “reforms” that the Scott Walker and the Wisconsin GOP promoted last year. 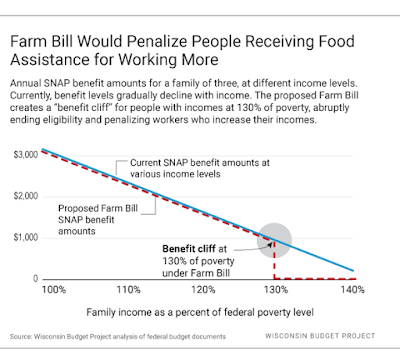 Wisconsin Republicans have been especially vocal about the importance of structuring public benefits so they phase out gradually, rather than creating benefit cliffs that can penalize low-wage workers who get a raise or increase their hours. Although most benefit programs have long been designed to avoid benefit cliffs, conservative Wisconsin lawmakers have nonetheless been using the potential problem as a rationale for redesigning public assistance. With that in mind, it’s hard to comprehend why Republican lawmakers wrote a Farm Bill that changes SNAP from a program that in most states gradually phases down assistance into a program with a substantial benefit cliff.

Yet EVERY SINGLE WISCONSIN GOP CONGRESSMAN VOTED FOR A FARM BILL THAT DOES JUST THAT, and I haven’t seen a note from one Wisconsin GOP legislator opposing this bill.

Heck, our Fair Governor was just in DC yesterday to hang out with his buddy President Trump. Why didn’t he use the opportunity to ask to get those cliffs out of the Farm Bill, and talk up the “Wisconsin Way”? (answer: because those “reforms” were always poll-tested talking points, and Scotty doesn’t really care about helping the working poor in Wisconsin)

As the recently-released Wisconsin Poverty report showed, SNAP is one the biggest ways that child poverty is reduced in Wisconsin. And likewise, pushing individuals into the work force more can have raise poverty if those individuals have to pay for child care or other work-related expenses. 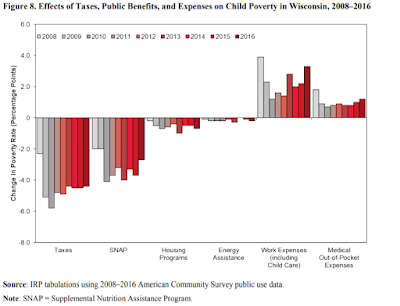 All the more reason that it is bad policy to cut off SNAP from the working poor, like the GOP House just did.

The cruel House Farm Bill is far from becoming law, it needs to be reconciled with a Senate bill that doesn’t have these changes to SNAP and then have the compromise bill passed by both houses. But even if these cuts to SNAP don’t happen, never forget that there were plenty of House Republicans that were more than happy to cut off millions of American families from food assistance without any way to make higher wages or improve stability that would lead to the self-sufficiency that Paul Ryan and other GOPs claim they want to see.

And make them all pay a price in November. And that should especially be true for the rural and suburban parts of Wisconsin that are “represented” by these amoral slime, since many of those places would be the ones hurt the most by the cuts in this farm bill. If these Republi-clowns think it’s so easy to live on the edge and be forced to work in a crappy job, maybe they need to see what it’s like for themselves.
Posted by Jake formerly of the LP at 6:00:00 PM