Here is a good example of rampant, everyday sketchiness/corruption that happens in the Walker Administration.

Sounds pretty good, right? But why is the taxpayer-funded Wisconsin Department of Revenue using their account to tweet it out? That doesn't have anything to do with helping collect taxes from Wisconsinites or give them information about refunds.

And the bigger tell is the @ symbols. A whole lot of right-wing GOPper-ganda outlets in Wisconsin and other paid liars. It's clearly done to cause a "Human Centipede" situation where this GOPper-ganda is catapulted forward into social media and other outlets that those groups are associated with. Then if things go right (wing), the "legitimate" media might report it without any context, and the average dope might believe Wisconsin is doing well, which should help Scott Walker in the November elections.

The strategy is cynical enough, but here's the bigger prpblem. Wisconsin didn't do well in income growth in the 1st Quarter of 2018.

If you look at Thursday's report from the Bureau of Economic Analysis, Wisconsin's 4.0% annualized growth for the 1st QUarter of 2018 isn't all that special. 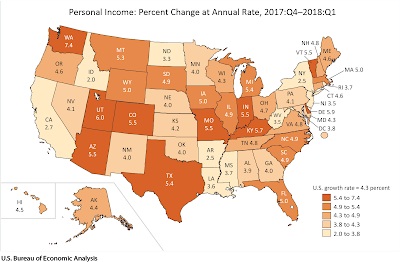 That 4.3% places Wisconsin 30th in the US out of the 50 states, and is a decline from the Q1 2017 increase in Wisconsin of 8.1% (Q1 often has large one-time increases because of COLAs and other Jan 1 adjustments, which are multiplied by 4 for Q1 because it's an ANNUAL rate of change).

Also, notice that the states around Wisconsin have bigger numbers than us? It means we ended up 6th out of the 7 Midwestern states for Jan-March 2018 when it came to income growth.

And if I may pick a cherry, that stat looks even worse if you look at the last 2 quarters. I'm not going to annualize this, so double it up if you want to get an approximation for that.

This is the context that the Walker Administration doesn't want you to know when they send out that tweet, they just want to you nod and stupidly accept that "it's working." In reality, it means we are falling behind our neighbors in another economic stat, and given that we lost more jobs than any other state in the nation in the first 2 months of Q2 2018, do you think we're going to look much better when this report next comes out in Septemnber?

Look, the GOP hacks in charge of these Twitter accounts are desperate to keep their phoney-baloney jobs (remember, Walker changed all these gigs to appointed positions). But that doesn't make it OK to spread campaign propaganda on our tax time. Especially when it tries to dress up bad news as good news.