Housing Bubble, low wages, and low savings is making it feel like mid-2000s all over again

I've been getting a lot of flashbacks to George W. Bush's second term, and not just because our GOP-run federal government is acting disgracefully toward brown people and compromising America's values in the process.

The real reason is what I'm seeing in the economy. Housing prices have continued to rise at levels well above the increases in income, meaning that housing affordability in the US is now at its lowest levels in nearly 10 years.


In the first quarter [of 2018], affordability as measured by the average share of income needed to buy a median-priced house was at its worst since the third quarter of 2008, according to Attom Data Solutions. The firm's affordability index fell to 95, the lowest since it read at 86 nearly a decade ago.

This was not just because home prices were too high. In fact, the rate of appreciation slowed in the first quarter, according to Attom.

What really tipped the scale was the rise in mortgage rates, said Daren Blomquist, the senior vice president at Attom, in a report. Mortgage rates hit their highest level in seven years last month, and the national average 30-year fixed rate is now above 4.4%, according to Bankrate.com. A year ago, it was 3.8%.

And so, mortgage rates are up along with prices. Wages are rising, too, but not yet quickly enough to move the needle on affordability.

"Home-price appreciation continued to outpace wage growth, speeding up the affordability treadmill for prospective homebuyers even without the rise in mortgage rates," Blomquist said.

That mediocre wage growth combined with higher home prices and long-term interest rates are combining for what appears to be a minor downturn for the volume of home sales in the near future.


Homebuyers are pulling away from this summer’s expensive and competitive housing market, even as interest rates settle. Total mortgage application volume fell 4.9 percent, seasonally adjusted, last week compared with the previous week, according to the Mortgage Bankers Association. There were 12 percent fewer applications compared with the same week one year ago.

Applications for mortgages to purchase a home led the decline, falling 6 percent for the week. More new listings are coming on the market this summer, but buyers are bumping up against high prices and multiple offers. Cash buyers often have the upper hand, as sellers would rather not deal with appraisals that might not meet those higher prices.

If June is anything like May, demand is still high, but sales will be lower. A monthly demand index from real estate brokerage Redfin found the same number of people were requesting home tours in May as in April, but the number of buyers making offers fell 16.7 percent year over year.

"People listing their homes for sale in higher numbers this April and May is good news for buyers, and good news for home sales," said Redfin's head of analytics, Pete Ziemkiewicz. "But it's still not enough to satisfy buyer demand, which means price increases will likely continue."

And the problem of less-affordable housing is being compounded by the fact that other types of debt are also eating into Americans’ wealth. On a dollar amount, it’s higher than it was when the economy crashed in 2008, although the gains during the Obama Recovery have blunted some of this burden.

By the end of the second quarter, LendingTree is forecasting total mortgage and consumer debt to reach $15.7 trillion compared with $14.7 trillion 10 years ago. During the past decade, credit card debt, student loans and car loans have increased 45% and are set to hit $4 trillion by December. Mortgage balances currently make up about 68% of disposable income, while credit card balances are under 7% of income. In 2008, mortgage balances were as high as 98%, while credit card balances accounted for 10% of income. Millennials, noted LendingTree, are underrepresented in the homeownership rates. "Homeowners today, on average, have significant equity in their homes," said LendingTree in the report. "Ten years ago, equity was virtually nonexistent."

While mortgages aren't as much of a burden on homeowners as they were during the housing crash, the burden is still increasing thanks to rising mortgage rates and growing property values. According to research from online real estate company Zillow, during the first three months of the year, monthly mortgage payments accounted for 1% of the median income. The last time the mortgage burden was that high was in the second quarter of 2009.

Zillow found that the share of income needed to cover the monthly mortgage payment increased to 17.1% in the first quarter of 2018, which is up 1.2 percentage points from 15.9% in the fourth quarter of 2017. It remains below the historical average of 21.1% from 1985 through 2000. What's more, mortgage payments haven't accounted for that percentage of income since the second quarter of 2009, when mortgages were 17.5% of median income. Zillow noted that mortgages were becoming more affordable back then as home prices and interest rates were declining owing to the recession. The share of income that went toward a monthly mortgage payment hit a peak of 25.4% in 2006 amid the real estate bubble, noted Zillow.

And even though unemployment is at a low 3.8%, wages aren’t rising as you’d think they would in a tight labor market. But you know what is rising? Prices, to the point that we have no real wage growth in this country these days. 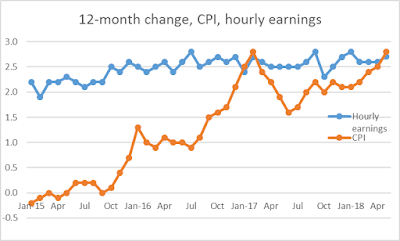 There was more evidence that perhaps American consumers are slowing their spendthrift ways today, as May's income and spending report said that there was no increase in Personal Consumption Expenditures (PCE) last month, when adjusted for inflation. That led the US savings rate to rise for the first time in 3 months to 3.2% for May. However, that level is still well below the 6% range that it was in until 2 years ago, and that 3.2% is still down at levels we saw in the Bubblicious mid-2000s.

Interestingly, while we had a jump in long-term interest rates in the first few months of the year, that’s reversed a bit in the past few weeks, with the 10-year Treasury note shedding about 25 basis points from its peak of 3.1% in mid-May. That’s nice if you’re looking to borrow for a house, but it also has happened at a time when the Federal Reserve has been consistently raising short term rates, to the point that the 2-year note is fetching more than 2.5%, not far below the 10-year rate.

And that convergence has been a consistent sign on Wall Street that the economy is likely to hit a downturn in the near future, as Matt Phillips of the New York Times noted earlier this week.

The gap between two-year and 10-year United States Treasury notes is roughly 0.34 percentage points (now less than 0.32%, as of today's close). It was last at these levels in 2007 when the United States economy was heading into what was arguably the worst recession in almost 80 years.

As scary as references to the financial crisis sound, flattening alone does not mean that the United States is doomed to slip into another recession. But if it keeps moving in this direction, eventually long-term interest rates will fall below short-term rates.

When that happens, the yield curve has “inverted.” An inversion is seen as “a powerful signal of recessions,” as the president of the New York Fed, John Williams, said this year, and that’s what everyone is watching for.

Every recession of the past 60 years has been preceded by an inverted yield curve, according to research from the San Francisco Fed. Curve inversions have “correctly signaled all nine recessions since 1955 and had only one false positive, in the mid-1960s, when an inversion was followed by an economic slowdown but not an official recession,” the bank’s researchers wrote in March.

UW’s Menzie Chinn had a similar observation last month in Econbrowser, and included the following chart of the last 35 years.

I’m not saying things are going to be near as catastrophic as the Great Recession that followed. But as the Obama Recovery hits its 9th year this month, the stagnating housing market, low savings, no real wage growth and bad Wall Street signals show there’s not much left to keep it going for long.

Yep, a whole lot of things sure seem like 2006 these days, and not just because it’s shaping up to be a big year for out-of-power Democrats in this November’s elections. I just hope the quality of music in this country picks up to that 2006 level.