SCOTUS throws Walker/WisGOP a lifeline on Internet sales taxes. And the WisGOPs would throw it back.

Over the weekend, we had a good rundown by the Matt DeFour and Mark Sommerhauser in the Wisconsin State Journal about last week's Supreme Court decision allowing for states to require companies selling a product over the Internet to have sales tax included on a purchase, and the effect that it might have on Wisconsin’s budget.

The article mentions that all companies who sell items to Wisconsinites aren't required to pay sales tax because no law has been passed in the state requiring it. But adding that requirement could generate a lot of money.

In Wisconsin, [a] report from the [U.S. Government Accountability Office] estimates, the new revenue would total $123 million to $187 million a year.

Rep. John Macco, R-Ledgeview, chairman of the Assembly Ways and Means Committee, said state DOR officials told him the additional revenue could be about $160 million per year.

That’s about what a one-time child tax credit and back-to-school sales tax holiday is expected to cost this year, or how much the state recently received in federal funds to finish the Interstate 94 expansion project in southeast Wisconsin to accommodate the $10 billion Foxconn project, or almost twice as much as the state approved for school safety grants earlier this year.

It seems logical that there's a lot more of sales tax is not being paid, which is what the Supreme Court decision is trying to prevent. So what do Wisconsin Republicans want to do with this opportunity improve the state’s financial stability? GIVE IT AWAY, of course! And our fiscally illiterate Governor Dropout is leading the way.

Gov. Scott Walker signaled Monday the state would start collecting sales taxes for internet purchases — but offset any new money with cuts to other taxes by the same amount.

“It shouldn’t be a tax increase. It should be leveling the playing field for retailers,” Walker told reporters after touring the University of Wisconsin-Madison’s dairy operations at Babcock Hall…

The GOP governor told reporters he favored collecting the money, but wanted to tie it to tax cuts of the same size so the state doesn’t take in more money overall.

But the problem is that Wisconsin is going to need all the tax revenue it can get. And you can see where that problem starts, based on the recently-approved final budget projections for the 2017-19 biennium, which includes the pre-=election spending spree by Walker and WisGOP. based on in-year adjustments.

So we’ve got deficits built in for this fiscal year and a much bigger one for next year. That reflects the fact that the Walker/WisGOP pre-election spending spree is especially targeted to hit between July 1 and the November elections. That $365.6 million imbalance for FY 2019 will carry over into the following budget, unless you count on the child tax credit and sales tax holiday measures to be one-time gimmicks, in which case the imbalance would “only” be around $235 million.

Now, let’s go back to the 2019-21 budget projections that the Legislative Fiscal Bureau put out in September. This document notes that this includes $168 million in increased debt payment costs (from Foxconn-related construction of I-94 and prior Walker Admin measures to scoop-and-toss prior debt payments into later years), and has the (now-rosy) projections of added jobs and costs that are part of the Fox-con package.

If you account for the changes in recent policies, and assume the one-time tax moves end, it places the state's structural deficit at around $1 billion for the 2019-21 biennium. And that's assuming we don't spend another dime of General Fund money on our already underfunded schools, UW System, and health care (good luck with that when inflation is going up 2.5%+ a year). In addition, our underfunded roads account for another $1 billion deficit in our Transportation Fund, with backlogs and deferred expenses growing by the year, but today Walker didn't offer any of the new sales tax money today to go to the roads.

GOP Reps. John (Wacko) Macco and Dale (Koo-Koo) Kooyenga echoed Walker's ideas in the State Journal article, wth both Joint Finance members saying they wanted to use the $160 million in increased sales taxes to cut income and/or property taxes. Do we need a remnder of how this would end up? 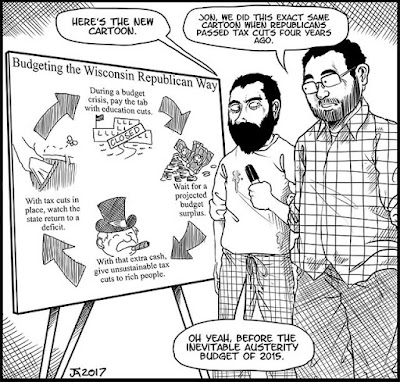 Reality tells you that these proposed GOP income tax cuts cannot happen without even more deterioration in the state's already declining services and quality of life. Then again, that’s what the ALEC-GOPs in charge at the Capitol want- all the better to sell off the state’s services to campaign contributors and encourage more progressive and/or talented people to leave the state, with only a few oligarchs running things and a number of indentured servants working for them.

I have a better idea. In addition to helping Main Street businesses that improve our communities, the one-time revenue boosts can be a way to return the state to fiscal wellness. It also can lead to investments in public goods and services that used to make Wisconsin a great place to live and prosper in, and make us more economically competitive in all parts of the state.

But to do so, we’ll have to boot out Governor Walker, Wacko Macco and Koo-Koo Kooyenga from their very vulnerable seats of power this November, and get some people in charge that recognize that leveling the playing field by requiring sales taxes on Internet purchases offers a lifeline for this state. Because the statements by the ALEC-GOP crew in light of last week’s Supreme Court decision shows they’ll repeat the failing pattern of “cut taxes for my cronies, borrow against our future, and let everyone else deal with the fallout” if they’re allowed to grab these hundreds of millions of dollars.
Posted by Jake formerly of the LP at 6:14:00 PM