Big job and revenue gains in Wisconsin for 2021

Two bits of positive economic news in Wisconsin today. The first showed that our already-tight labor market grew even tighter (and better) in December.

The Department of Workforce Development (DWD) today released the U.S. Bureau of Labor Statistics (BLS) preliminary employment estimates for the month of December 2021. The data shows that Wisconsin's unemployment rate declined to a record low of 2.8% in December, down from 3.0% in November. The data also showed that the total number of people in Wisconsin who are counted as unemployed declined to a record low of 86,200. Place of Residence Data: Wisconsin's labor force participation rate in December was 66.4%, 4.5 percentage points higher than the national rate of 61.9%. Wisconsin's unemployment rate in December was 2.8%, a record low for the data series. Place of Work Data: Wisconsin total nonfarm jobs increased from November 2021 to December 2021 by 6,300, while private-sector jobs increased by 5,300 over the same time period. The monthly increase in jobs was driven by the state's manufacturing sector which added 4,800 jobs.

The manufacturing increase feels a bit too good to be true, but it certainly was a strong 2021 for the sector in Wisconsin, with 18,600 more jobs reported vs what we had at the end of 2020. It now means that there are more jobs in manufacturing in the state today than there were before the pandemic. 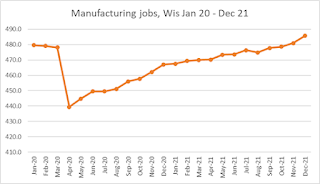 The 2.8% unemployment rate is rightfully getting headlines, and it continues great numbers in the household survey in 2021. Nearly 55,000 Wisconsinites were added back to the labor force, and nearly 90,000 more people ID’d themselves as “employed” compared to the end of 2020. 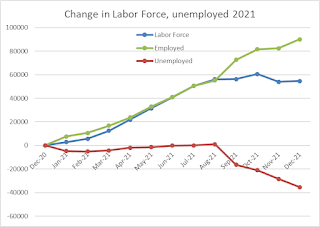 It again illustrates how completely BS the WMC/WisGOP meme of “workers sitting out collecting unemployment” is. UW-La Crosse PoliSci Professor Anthony Chergosky looked at the data, and rightfully said we should instead be trying to improve quality of life and services in Wisconsin instead of trying to hurt the poor and unemployed.

Wow, 2.8% unemployment in Wisconsin. The idea that there's tons of people who are currently refusing to work and are gaming the system is just fantasy. Focus on 1) child care, 2) attracting new workers to the state.https://t.co/EH4VkkdtQi

The strong job market is underscored by Wisconsin tax revenues continuing to grow at unprecedented levels. The Wisconsin DOR released the December revenue totals today, and it showed double-digit growth in all major types of taxes vs the end of 2020, despite no increases in tax rates being put in place. 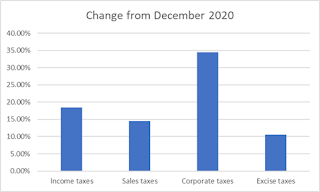 Overall tax revenues are also up 11.7% for the first half of the 2022 Fiscal Year vs the last 6 months of Donald Trump’s presidency. Pretty big stuff, and well beyond the level of inflation. Even though some of this increase will likely decline due to income tax cuts that will cause both higher refunds and take-home pay in early 2022, it’s worth noting that the Wisconsin 2021-23 budget expected taxes to be $1 billion LOWER than what we had at the end of 2021. 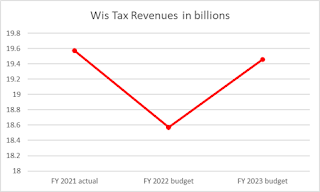 So even if all of the 11.7% increase in revenues for the first 6 months of FY 2022 is given back over the next 6 months, we still would have $1 billion more to use for the rest of the budget. We'll see just how many more funds we might have when the Legislative Fiscal Bureau releases new revenue estimates next week. We could learn that we have a whole lot of funds to play with and/or give back in creative ways very soon, and perhaps that can help deal with a Wisconsin jobs situation whose main non-COVID concern is in finding enough people to keep this good thing going.
Posted by Jake formerly of the LP at 7:13:00 PM