Evers plans for the surplus - rebates, caregiver help, and schools

Well that didn’t take long. Governor Evers is already out with a plan on how to use some of our recently-announced $3.8 billion surplus.

In response to the new projections, and in contrast to Legislative Republicans who indicated they have no immediate plans to use the windfall prior to the next biennial budget that will likely not be passed until summer 2023, Gov. Evers emphasized that Wisconsinites cannot wait for over a year to be provided relief from rising costs at the checkout line and gas pumps. The governor’s plan announced today invests nearly $1.7 billion of the projected revenue surplus to provide a $150 surplus refund to every Wisconsin resident, provide $131.8 million in targeted tax relief to caregivers and families, and invest almost $750 million in education, while holding the line on property taxes. 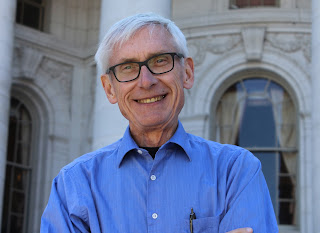 Let’s dig into the proposed bill and get the details, and give a look at some of the items that aren’t necessarily getting the top billing. The rebate basically goes to anyone who will be filing taxes in the coming months, and it looks like residents that don’t have to file taxes would also get the rebate check – they just have to fill out a form at DOR’s website. It’s a flat $150 for everyone, “multiplied by the number of personal exemptions," which led to this tweet from Evers on the rollout.

BREAKING: I just announced my plan to use part of our $3.8 billion surplus to send every Wisconsinite a $150 surplus refund to help address rising costs at the gas pump and checkout lines while reducing barriers to work by making caregiving and childcare more affordable. pic.twitter.com/7GK7EiXNV7

That’s not cheap, as the estimated price tag would be $815.7 million. But it’s also less than ¼ of the $3.8 billion available. As for the education funding, the Legislative Reference Bureau says there are three main forms for K-12, and that the UW and Tech College systems also get added state funding for the next school year.

Along with that $188 million in equalization aid is the fact that revenue limits are raised by $200 a student, which the Evers Administration estimates at $162.4 million. In addition, while the Evers’ Administration’s “fact sheet” says that voucher and charter schools would get an extra $642 per student for next year, $15.5 million of the remaining $25.6 million in state-funded property tax relief will fill the “voucher hole” that usually is filled with property taxes. Can’t say I’m thrilled with voucher schools getting another 7% per student for next year, but it probably was done to soothe some of the DeVos/ALEC crowd that would have whined about public schools getting all the funding. And there’s not a lot to lower property taxes overall for next year or for any kind of structural change in our formula, but maybe Evers is trying to keep it as simple as possible. The UW and Tech College aid is helpful, given that the GOP Legislature limited UW to ZERO in general tax dollar increases, and the Tech Colleges only got an extra $2.25 million a year. Given that costs have gone up quite a bit since the budget was passed back in June, it would take off the pressure that comes with limited funding from the state and frozen tuition rates (That said, I’m not sure if the Tech Colleges can use the funds for the classroom since I don’t see their revenue limits going up). There are two other “family-oriented” tax breaks that are put in Evers’ package, with the first being a long-overdue tax credit for caregivers.

The bill creates an income tax credit for individuals who pay for items that directly relate to the care or support of a family member who requires assistance with one or more daily living activities and is over the age of 18. The credit equals 50 percent of the expenses, limited to a maximum annual credit per family member of $500, or $250 for married spouses filing separately. If more than one individual may claim the credit based on the same family member, the maximum annual credit amount is apportioned among the individuals based on expenses paid. For married couples filing jointly, the credit phases out between federal adjusted gross income (AGI) of $150,000 and $170,000, and no credit may be claimed if federal AGI exceeds $170,000. For all other taxpayers, the phase out range is between federal AGI of $75,000 and $85,000, and no credit may be claimed if federal AGI exceeds $85,000. Under the bill, expenses that qualify for the credit include amounts spent on improving the claimant's primary residence to assist the family member, purchasing equipment to help the family member with daily living activities, and obtaining other goods or services to help care for the family member. Expenses that do not qualify for the credit include general food, clothing, transportation, and household repair costs, as well as amounts that are reimbursed by insurance or other means. The credit is nonrefundable, which means it may be claimed only up to the amount of the claimant's tax liability.

This helps many Wisconsinites who are taking care of elderly or high-needs family members in their homes, and while it’s likely not near enough for people having to take on that extra strain, you’d think “family values” Republicans would be all about this. Especially at a cost of $102.5 million – or less than 3% of our current surplus. The other tax credit goes along with a new child care credit that kicks in for 2022 and matches up with the Federal write-off, and doubles what Wisconsinites can get at the state level.

Comparatively small price tag on that one, $29.3 million in a time where taking care of kids is such a big concern and potential barrier to work. Seems like something that is very worthwhile. Even with all of this, the Evers package wouldn’t even use half of the projected surplus - $1.7 billion out of $3.8 billion. You divide it up with these 3 main areas, and it looks like this. 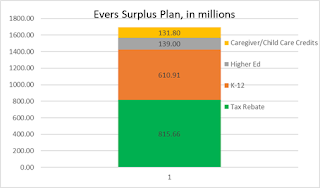 And Republicans can’t give a complaint about “long-term costs”, because most of these items are one-time shots that only effect the next 12 months, and don’t have permanent increases in spending or tax breaks. So do I think this means we can count on the GOP Legislature to give this relief to Wisconsinites and our schools? 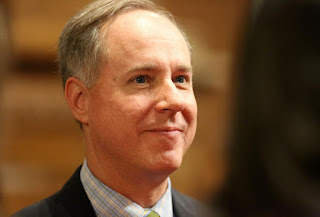 Yeah, not really. Sure enough, Senate GOP Leader Devin LeMahieu is already whining about "Biden Bucks", saying Evers should use COVID-related stimulus funds (which can't be used for tax cuts) instead of state funds. It's a really pathetic criticism, when you think of it. But they really don't have anything else. That being said, let’s see if WisGOPs are so far gone into hackery that they decide to do nothing with our windfall. If they are that cynical, then Evers and other Dems should pounce by running against “do-nothing” Republicans who clearly couldn’t care less about stabilizing and improving things for the vast majority of Wisconsinites.
Posted by Jake formerly of the LP at 6:29:00 PM