I saw that WisGOP came out with a plan this week to help communities add police.

Specific bill language was not made available Tuesday, but [GOP Rep. William] Penterman said the package proposes $5,000 bonuses to all new law enforcement officers in Wisconsin; a signing bonus that would provide $1,000 for each year of work experience to officers relocating to Wisconsin from out of state, capped at $10,000; and $2,000 bonuses for officers already in Wisconsin, Penterman said, adding that some of the money would come from local agencies. “We can’t serve the people, we can’t do the things that our community needs us to do and wants us to do unless we have people filling those positions,” said Dodge County Sheriff Dale Schmidt, vice president of the Badger State Sheriffs’ Association.

That led to this simple observation today about "staffing shortages" in public services.

I notice that part of the #wiright pose bills to “support police” involves using funds to raise wages to attract more officers.

Funny how WisGOP thinks some jobs are more important than others, isn't it? So what else does WisGOP want to do to help get more people to want to be cops.

OK, higher pay and reimbursing police trainees and grants to small communities do seem like good ideas to encourage more people to enter law enforcement. So how are we going to pay for it? Do you even need to ask?

…[the package] would divert around $25 million in federal COVID-19 relief money toward recruiting, training and retaining law enforcement officers.

Which means it’s a stunt designed to have Governor Evers veto it, and then have Republicans complain about “defunding police”. Not only does Evers not want to be told what to do with the funds sent to his office, but let’s recall that Attorney General Josh Kaul already asked the Legislature to add funding to law enforcement. The difference would be that Kaul would actually use the state’s large budget surplus instead of throwing away COVID funding from the Feds.

Kaul said the “centerpiece” of his package is a series of grant programs that would dole out more than $50 million to fund community policing and prosecution efforts, violence prevention services, re-entry programs and crime victim services. Another approximately $4 million would go toward law enforcement training and programs focusing on school safety and missing and murdered Indigenous women.

Not surprisingly, the gerrymandered GOP Legislature hasn’t considered those ideas. Nor have they considered other bills from Evers and Dems that would have paid for more police with state money, nor have they given local governments the ability to afford that added staff if they wanted to do it on their own. That reality was reiterated in a memo that outgoing Dem Assembly Leader Gordon Hintz requested from the Legislative Fiscal Bureau, which notes that the GOP Legislature refused to give more shared revenue to communities in each of the last 2 budgets. 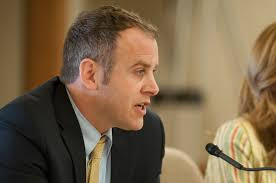 Good point, Gordon. Rep. Hintz also notes that Republicans failed to approve of Evers’ 2021-23 request to increase state Payments for Municipal Services (PMS), which would have given an extra $2.065 million a year to help local communities pay for police, fire and garbage services in communities that have state buildings. As mentioned previously, it’s WisGOP's lack of shared revenues and flexibilities for local governments that are the real reason police funding is lacking. That’s especially true for the state’s largest attractor of tourism dollars- Milwaukee, which was spending nearly half of its general fund on police in 2020, and spent more on police than the City was allowed to raise in property taxes for every year between 2016 and 2020. 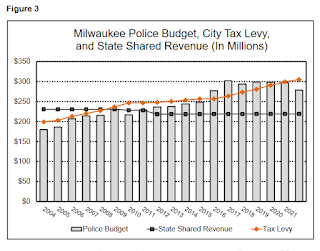 And even the proposed decline in 2022 spending on police in Milwaukee is misleading, as much of it reflects: 1. Moving 911-type communications positions out of the Police Department and into a centralized Emergency Communications Department that deals with multiple public safety areas. 2. $6 million in ARPA funding, as part of the funds sent to the City. Which means ARPA funding is already being used to hire and retain police officers in Wisconsin. If WisGOP is legitimately concerned about Wisconsin's largest city not be able to maintain its level of police, maybe they should have taken Gov Evers up on his offer to allow Milwaukee and many other Wisconsin communities to put in their own sales tax, if their voters were OK with it. They could even tie part/all of that sales tax to police operations and other safety measures if they want. I'd bet Evers and Milwaukee and other communities would be fine with that. But WisGOP really doesn't want Milwaukee or other large Wisconsin cities to be able to maintain a healthy police force and stable services. They just want the appearance of things getting worse (or appearing to be worse) so they can keep rube voters scared about "crime" and blame it on Evers/Dems. See through the WisGOP BS, and have them come up with a real funding solution that doesn't play games. You know, like what Dems want to do.
Posted by Jake formerly of the LP at 4:51:00 PM