COVID keeps floating around, but WisGOPs would rather help the unvaxxed than slow the virus

Well, none of the bits of information on this map from the Wisconsin DHS offers much solace on the COVID front. 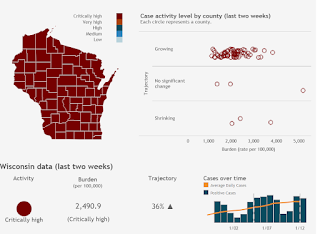 And while it seems that OMIcron isn't going to be as rough on the typical Wisconsinite as Delta has been, there's been no relief for hospitals Wisconsin hospitals yet.

#Wisconsin set a #COVID hospitalization record today--more people are hospitalized with/for/because of COVID today than at any prior point in the pandemic. Data from @WIHospitalAssn pic.twitter.com/rGU0TLz3DM

Given that new cases didn't start going bonkers until around Christmas, it may well still be Delta that is driving quite a few of these record hospitalizations. But regardless, the over-capacity hospitals are a major problem that's impeding treatment of less-avoidable ailments. I'm definitely interested in seeing DHS's update next week on the different COVID outcomes for the unvaxxed vs vaxxed in the state, and to see if the severe illness side has narrowed between the two groups like the caseloads apparently have. Or not, which would be its own set of news. But despite more than a year of evidence that vaccines and (especially) boosters lead to fewer deaths and hosptializations, that didn't stop WisGOPs from taking the side of the irresponsible today. And today's pro-COVID foolishness at the Capitol included this doozy.

Republican legislators in Wisconsin are advancing a bill to prevent businesses from requiring proof of vaccination, in part because, according to State Rep. Treig Pronschinske, "if you can't see the virus ... how can you stop it? How? You physically cannot see the virus." pic.twitter.com/0ZW9RFhtYJ

Wonder if Treig's constituents at Norske Nook and the Trempealeau Hotel like this "reasoning", letting big-government Republicans prevent them from taking the health measures that they think are appropriate. Also take a look at the large crowd of anti-maskers/anti-vaxxers who somehow had plenty of time on a Wednesday afternoon to go over to and literally pollute our Capitol to support these "all vax statuses matter" bills.

One of the bill's authors said allowing passports is to allow discrimination, comparing a gym forcing unvaccinated guests to wear a wristband to Jews wearing stars in Nazi Germany.@TimCarpenterMKE called the remark "bullshit," prompting a loud response in the overflow room.

So tired of being dragged down by these people. Me and a majority of Wisconsinites have done what we can and should do for the bette part of 2 years, and I'm tired of these dimwits prolonging and spreading this virus well past a point that we ever should have been at.
Posted by Jake formerly of the LP at 7:03:00 PM