For the last 2 years, we’ve seen Team WMC/WisGOP claim that expanded unemployment benefits were causing a worker shortage and that people were taking the benefits over taking jobs, and that this was a real bad thing for the economy. Problem was, it wasn’t true. Unemployment claims continued to fall in Wisconsin throughout 2021 as the economy improved, even as $300 add-ons and the PUA/PEUC programs remained. Then after those programs ended in September, claims bottomed out in October, and had its typical seasonal rise in November and December. 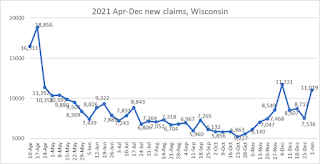 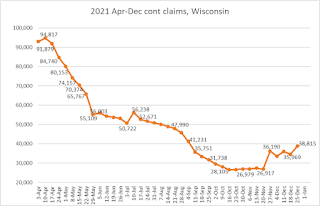 Wisconsin quickly recovered to near-record lows of 3.0% unemployment in late 2021, with a workforce participation rate that continued to grow, and ultimately peak in August and September. Since the COVID-era unemployment programs ended in September, our participation rate has slightly declined, so it didn't prompt a flood of Wisconsinites to go back to the work force.

This indicates the real problem today in Wisconsin is a lack of available work force. But those facts aren't stopping Team WMC/WisGOP, and they’re back with more “punish the jobless and make them desperate” BS, which they revealed yesterday.

Republican lawmakers said Tuesday they plan to pass legislation by next month that in the short term would nearly halve the amount of time people could receive unemployment benefits. Other bills they plan to pass would put in place more drug testing and work requirements for unemployment benefits and food stamps, cut off unemployment benefits for those who don’t show up for job interviews and suspend people’s access to public health insurance if they turn down job offers. Republicans said their efforts were aimed at getting more people off of public benefits and into the workforce just as businesses are clamoring for workers. “No person has ever become prosperous and independent on welfare checks,” Senate President Chris Kapenga of Delafield said at a news conference at the state Capitol.

Scot Ross reminds us that the Delafield Dumbass really shouldn’t be complaining about “welfare checks”.

Crook @SenatorKapenga, who illegally used his office to fundraiser for the whack job rewrite the Constitution group and tried to personally enrich himself w/a handout for Tesla had the fucking balls to say this about the social safety net. He can fuck off into the Sun. pic.twitter.com/GI2uTJ9fFt

In addition to the tired and obvious race-baiting, there are clear flaws when you apply these bills to the real world, as Tamarine Cornelius of the Wisconsin Budget Project points out.

The package includes a provision that would kick people off BagderCare for six months if they turned down a pay raise in an effort to keep their health insurance. In the middle of a pandemic. https://t.co/UiJbfF3TBJ pic.twitter.com/P57SjydE4U

Instead of creating additional red tape, legislators should expand access to child care, make sure child care assistance fits workers' schedules, and stop suspending driver licenses for things not related to driving. All those steps would help people get and keep jobs.


Let’s be real. These bills are just culture war crap that Team WMC/WisGOP float up there to try to distract rubes from the fact that their economic policies suck. If there is any economic policy that this is based on, it’s the idea that everyday workers need to be made as desperate as possible, with few options beyond accepting lousy work for bad pay. George Carlin pegged it perfectly nearly 20 years ago.

“They want more for themselves and less for everybody else, but I’ll tell you what they don’t want: They don’t want a population of citizens capable of critical thinking. They don’t want well-informed, well-educated people capable of critical thinking. They’re not interested in that. That doesn’t help them. That’s against their interests. That’s right. They don’t want people who are smart enough to sit around a kitchen table and think about how badly they’re getting fucked by a system that threw them overboard 30 fucking years ago. They don’t want that! You know what they want? They want obedient workers. Obedient workers, people who are just smart enough to run the machines and do the paperwork. And just dumb enough to passively accept all these increasingly shitty jobs with the lower pay, the longer hours, the reduced benefits, the end of overtime and vanishing pension that disappears the minute you go to collect it, and now they’re coming for your Social Security money. They want your retirement money. They want it back so they can give it to their criminal friends on Wall Street—and you know something? They’ll get it. They’ll get it all from you sooner or later ‘cause they own this fucking place! It’s a big club, and you ain’t in it! You, and I, are not in the big club.