How 5 Wis Senate districts tell the story of how the state has gone. And will go in Nov

I was going to follow up to my analysis of the changes the Supreme Court of Wisconsin did to the state Assembly map with a similar breakdown of the State Senate, but in the process of doing so, I came upon an even more intriguing observation, so I'm going to save the statewide breakdown of the Senate for later (bottom line - it heavily favors GOPs, even more than the Assembly). As the districts stand now, under GOP Gerrymander 2.0, there are 5 Senate districts that are close, lean Republican, but have trended in very different ways over the last decade. And how they trend in 2022 will likely tell us who wins both at the Senate level, and in the 2 big statewide elections of Govenor and Senator. I am also going to include Barack Obama's win in 2012 (as it's a good starting point to show where the trends change from), but ignore sizable wins by Scott Walker in 2014's Guv election and Tammy Baldwin double-digit re-election to the US Senate in 2018 Senate. The 5 districts are: District 5 - Milwaukee suburbs west of the City - Brookfield, Wauwatosa, New Berlin, and West Allis. District 17 - A huge amount of SW Wisconsin, going from Juneau County through Reedsburg, Richland Center and Dodgeville, and down to the Illinois state line with cities such as Plattevile and Monroe. District 19 - Neenah, Menasha, most of Appleton, and some of the countryside near those cities. District 25 - Most of NW Wisconsin - Superior, Ashland, Bayfield, Rice Lake, and Park Falls. District 31 - Eau Claire and a huge amount of Western Wisconsin going along the Mississippi River, from Trempealeau to River Falls/Prescott. District 5 is worth digging into for multiple reasons. The first is that it was the Senate district most affected by the Wisconsin Supreme Court's decision, as it went from a district that favored Dems by 9.8% in statewide elections between 2016 and 2020, to a district that favored Republicans by 9.8%. A big reason why is that the NW Side of the City of Milwaukee was taken out of the district, and it was replaced by more of Waukesha County. 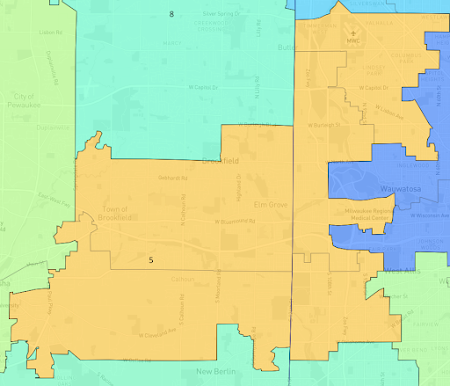 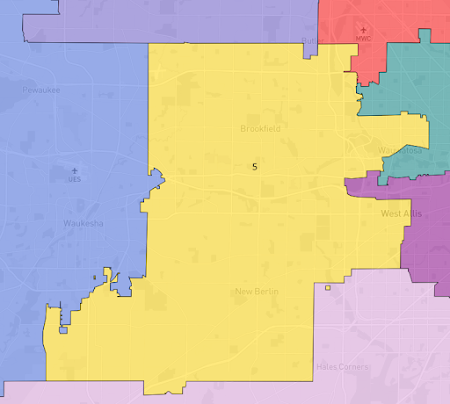 And the part of Milwaukee that was removed from Evers' maps (shown in blue) had a sizable Black population, which was offloaded into Senate districts 4 and 6 in the approved GOP maps (shown in red). 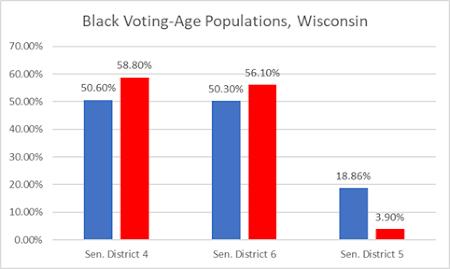 But even though District 5 is Republican leaning on the whole over the last 4 years, the voters of that district went from being 16 points more Republican vs the rest of the state at the start of the 2010s into one that matched Joe Biden's winning margin in Wisconsin in November 2020. 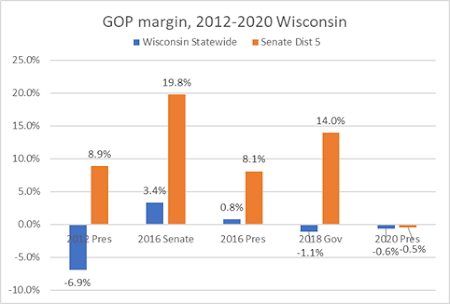 You can see that District 5 favored Ron Johnson by nearly 20 points in 2016, but given how much the voters of that district turned against Donald Trump, it would seem unlikely that RoJo would get that kind of margin this November, given the crazy, Trumpy BS he's been spouting. You'd also think that the GOP nominee for Governor would struggle here, especially if that candidate supports the Big Lie and tries to play culture war BS that clearly has been turning off the voters in this part of the burbs. It also means that current Senator Dale Kooyenga isn't nearly as safe as the 9.8% pro-GOP lean of the district would indicate, because the trends are shifting toward the Dems there. If Kooyenga is forced to answer for all of the fascist Trumpy BS that has been central to WisGOP "governance", and he doesn't have a good answer (because he certainly hasn't voted against it), Dems can win here. Senate District 17 would seem to be another enticing target for Dems, as Sen Howard Marklein has been forced into removing any facade of "independence" due to being the co-Chair the Joint Finance Committee, and has shot down Medcaid expansion, tax cuts for working families, and increased resources for schools and local governments. But it's also turned from being a Dem-leaning district into one that backed Donald Trump by a signficant margin in 2016, and a bigger margin in 2020, while also having a lot of Trump-Feingold voters in 2016. 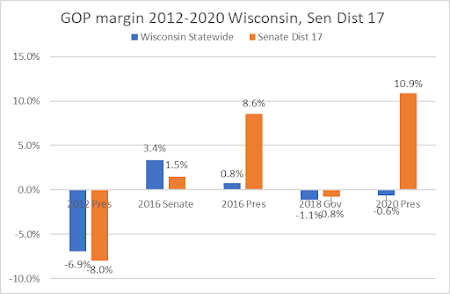 If Trump-election patterns hold, then Marklein should be fine and the Republicans should gain vs 2018's totals in District 17. So does that happen, or does this district go back to being one close to the statewide trend, and all races become competitive here? Moving over to Appleton-Neenah-Menasha, District 19 has traditionally leaned Republican. But the gap has been getting smaller, and Trump won the district by less than 2 points in 2020. 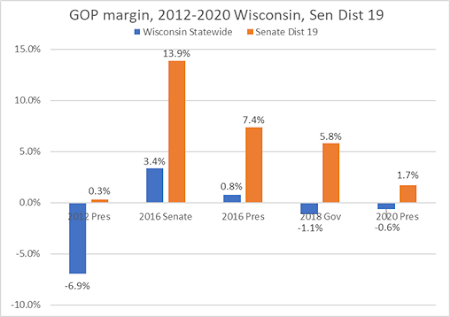 Ron Johnson should especially be concerned about that trend in District 19, as he likely can't count on a double-digit win there in 2022. In addition, current GOP State Senator Roger Roth is running for Lt. Governor instead of another term, and one leading candidate to replace Roth is Rachael Cabral-Guevara, who was one of four Assembly Republicans who were flown to Arizona last Summer to "observe" the Cyber Ninjas' ansurd audit of ballots cast in the 2020 election. Those are the type of actions and candidates that will put District 19 into play in November, and Dems should fight hard there. By contrast, Dems are on defense in District 25, which has long been held by that party, but current Senator (and Dem Leader) Janet Bewley chose not to pursue another term. In addition, this district has turned hard toward Republicans in recent years, which gives you an idea of how the 715 has become much more red and Trumpy. 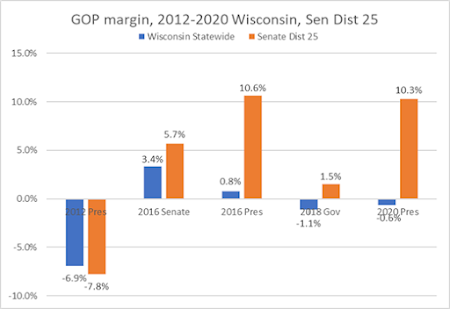 For Dems to hold on to the district, they likely will need to see numbers that resemble 2018 than 2016 or 2020. And what happens in District 25 will likely explain a lot in how the statewide races end up as well. District 31 in the Eau Claire area has a similar story to District 25, but not as pro-Trump, and Evers won this district in 2018. 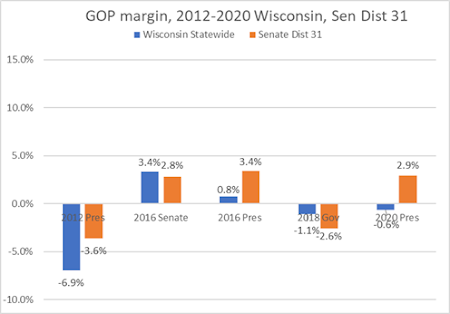 With the blue college towns of Eau Claire and River Falls in this district, Dems will likely benefit from having more younger voters on campus in 2022 vs Fall 2020. But the traditionally blue/purple rural areas have been turning over, with the Assembly district that includes Trempealeau and Buffalo Counties flipping in 2014 to a Republican that says things like this.

Republican legislators in Wisconsin are advancing a bill to prevent businesses from requiring proof of vaccination, in part because, according to State Rep. Treig Pronschinske, "if you can't see the virus ... how can you stop it? How? You physically cannot see the virus." pic.twitter.com/0ZW9RFhtYJ

Incumbent Dem Senator Jeff Smith is running for re-election, and you figure GOPs will target this district hard in an attempt to grab a 2/3 majority in the Senate (they are 1 seat away right now). In addition, this district is entirely in the open 3rd Congressional seat being vacated by Ron Kind, which is one of the GOP's biggest targets as they try to get control of the House of Representatives. So big showdowns all over here. You look at recent history, and it seems likely that if one party or the other wins all 5 of these Senate seats in November, and/or wins all 5 of these districts at the top of the ticket, then that party will likely win all of the statewide races as well. And that's why both parties should be expected to compete fiercely in these areas in particular, in addition to driving up the base in their traditional strongholds. It also will go a long way toward asking which Trump-era change in voting habits will stick around for the rest of the 2020s - rural, northern and western parts of Wisconsin turning toward the GOP, or well-educated Milwaukee suburbs and medium-sized metros going to the Dems. If one trend remains and the other fades, expect that party to be the main winner of statewide elections in what is still a very purple state.
Posted by Jake formerly of the LP at 11:58:00 AM