Much like the national job market, more Wisconsinites continue to find work, even as the number of available workers seems to be near tapped out.

Not mentioned in the report is that February's jobs was revised from an already-huge gain of 18,800 to an even larger 22,900 jobs, so that's 5,100 more jobs than we had in the last report. Pretty darn good. With a year of wide-scale COVID vaccinations in place in Wisconsin, just over 13,000 Wisconsinites added to the labor force, which is solid in itself. But that is dwarfed by the more than 60,000 that have said they’ve joined the ranks of the employed, which has dropped the state's unemployment rate by more than 1/3 in the past 12 months. Go back to the end of 2020, and more than 80,000 more Wisconsinites say they are now working. 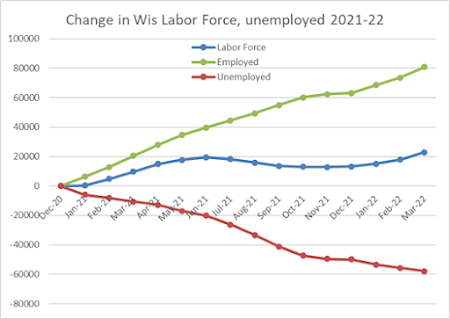 Job growth leveled off in March after the big (seasonally-adjusted) increase in February, but we’re still up more than 60,000 jobs in the last year in the payrolls survey. 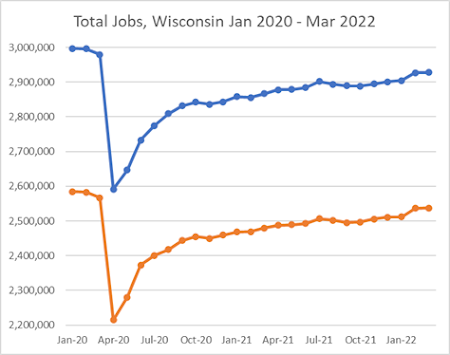 We’re still down 69,000 payroll jobs from our pre-COVID peak, although more Wisconsinites are working than ever, so…self-employed hustling and/or remote work? Regardless, 336,000 jobs have come back from the COVID-induced recession, and this has been a better 6-month period of job growth in Wisconsin than the 2 6-month spans before it, which wouldn’t be what you’d expect as full employment was restored in the Biden Boom. 6-month job growth, Wisconsin
Sept 2020-Mar 2021 +35,600
Mar 2021-Sept 2021 +22,500
Sept 2021-Mar 2022 +38,400 The one notable downside in this report was a 5,500-job decline in Accomodation/FoodServices, which seems counter to a state that had virtually all remaining mask mandates and COVID-related restrictions go away in March. Let’s see if that number bounces back in April (which would indicate March’s losses are people quitting and rotating into other jobs) or if it’s the sign of some kind of layoffs in that industry. But that aside, it seems like the Wisconsin jobs market was in good position as March ended, and our real concerns should be in improving work conditions and wages so that workers don’t fall behind due inflation, and in making this state a better place to live and work in, so more people will want to come to the state. And if Dems are smart over the next 6 1/2 months, they hammer home that the changes to take our jobs market and economic competitiveness to the next level won’t happen as long as regressive Republicans are in charge of the Legislature. Because GOPs are all about blocking the investments and policies that encourage talent and good-paying jobs to locate in Wisconsin, likely by design. 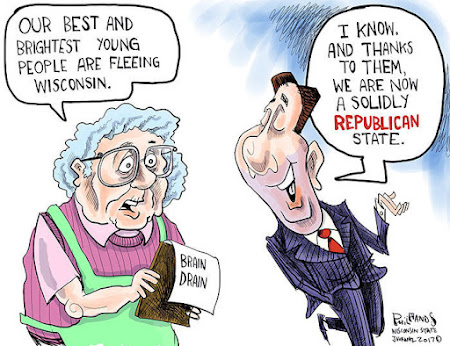