So how bad is Wis Gerrymander 2.0 in the Assembly?

You settle in for an Easter Weekend on Friday afternoon, you flip by social media, and you see this cross over the Twitter feed.

SCOTUS overturned earlier map. @judgehagedorn wrote in a concurring opinion that he understood that ruling as directing the state justices to start with a race neutral map, writing he sees “the Legislature's proposal constituting our only feasible option.”

RACE NEUTRAL? Because Evers' maps had 90% of the state's districts being majority White wasn't White enough? In a state that's 81% White? Given those numbers, calling Evers' maps a "racial gerrymander" is ridiculous enough, but it's also worth noting that the GOP's maps both significantly increased how Black some districts are, while also reducing the number of districts that are majority-Black to 5 from the current number of 6. The GOP maps also make the 2 majority-Black Senate districts even Blacker. 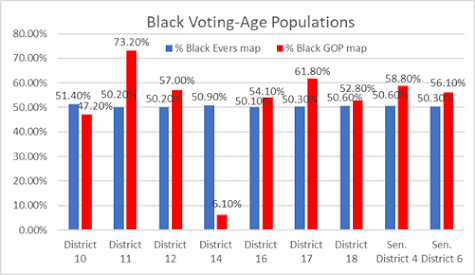 And why do you need to go with an entirely different map for the rest of the state when the "justices" could have just changed the majority-minority districts in Milwaukee that were in question, and kept everything else under the "least change" standard? UW PoliSci Professor Robert Yablon pointed out how absurd it was for a court to choose such an egregiously slanted outcome.

WI’s new maps score worse than every one of those prior maps on every major partisan fairness metric. A lot worse. The Assembly and Senate maps both have partisan asymmetry levels 3x to 5x higher than the average judicial map. (Based on @PlanScore data from @CampaignLegal.) 3/6

That is virtually unheard of. As the Indiana Supreme Court once wrote, adopting “a plan that has been uniformly supported by one major political party and uniformly opposed by the other is incompatible with … judicial independence and neutrality.” 5/6

It was garbage enough when the Federalist Society hacks on SCOTUS sent these maps back to the Wisconsin Supreme Court to reconsider, but it's also worth remembering that this GOP-favoring decision was on top of the Wis Supreme Court's earlier standard of "least change". That had already locked in much of the GOP's 2010 gerrymander, and was a standard that seems to have been entirely created out of the air. Ok, so we know it's a screw job, but how badly have things changed from Evers' legislative maps? Well, I took a look at it through the Dave's Redistricting app, and the answer is "enough to allow Republicans to get away with a lot more." In the Assembly, Evers' maps had 55 districts that favored Republicans, and 44 that favored Democrats. That's a 6-seat swing toward the Dems vs what we have today under gerrymander 1.0, and in order to capture the Assembly, the Dems would need to win statewide around 55%-45%.

You can see a lot of close seats go the Dems' way under the Evers map. By comparison, the now-approved GOP gerrymander 2.0 flips 6 seats into the R column, making for a 61-38 GOP map, and a lot of GOP seats are now drawn so they traditionally get between 43 and 46% Dem votes (meaning they favor GOPs by 8-14 points). Add it up, and the Dems would need to win around 56-44 statewide to flip the Assembly.

The 6 districts that flip from Dem to GOP are as follows: 21st - Currently held by Jessie Rodriguez (R). Goes from Dem +0.5 to GOP +4.6. GOP Gerrymander takes it into GOP-voting Franklin instead of Dem-leaning Cudahy. 37th - Currently held by William Penterman (R). Goes from Dem +27.1 to GOP +9.7. This district was somewhat gerrymandered under the Evers maps to include a large amount of Sun Prairie and some of East Side Madison in Dane County, and it took out the GOP-voting Watertown area. 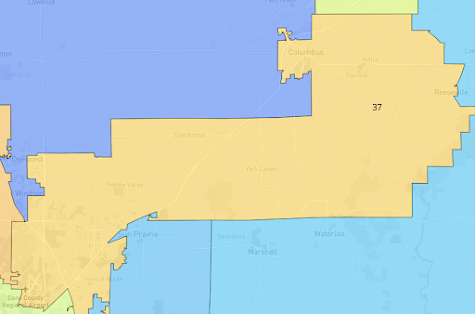 By comparison, the GOP map continues much of the 2010s gerrymander in District 37, which uses Watertown and other parts of Dodge County to counteract northern Dane County.

42nd - Currently held by Jon Plumer (R). Goes from Dem +1.5 to GOP +11.9. This is related to the 37th District changes, as Evers' maps had the fast-growing Dane County suburb of DeForest in this district, and the GOP gerryander has DeForest in the 37th. In the GOP's maps, the 42nd isn't in Dane County at all, and instead heads East into GOP-voting areas like Ripon and Green Lake County. 85th - Currently held by Pat Snyder (R). Goes from Dem +0.6 to GOP +4.1. The Evers maps densely packed this district into Wausau and a couple of nearby suburbs. The GOP gerrymander has fewer urban areas and more of rural eastern Marathon County. 88th - Currently held by John Macco (R). Goes from Dem +1.0 to GOP +9.6. A Green Bay version of the 85th - Evers' maps packed this district into Eastern GB and nearby suburbs like Bellvue, Allouez and part of De Pere. The GOP maps got rid of some of the suburbs and instead gave Wacco Macco countryside towns like Denmark. 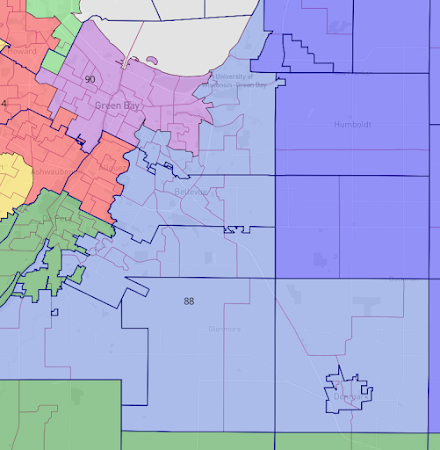 96th - Currently held by Loren Oldenburg (R). Goes from Dem +0.8 to GOP +3.7. The GOP maps takes out some of the territory in rural La Crosse County and Vernon County, and takes more of GOP-voting Monroe County. There are also four districts that don't flip, but become a lot more safer under the GOP's map, with margins going from less than 5 to more than 10. Three more go from high single digits to over 10, and 7 of those 8 seats are Republican. By comparison, only 4 seats go from having margins over 10 down into single digits. Interestingly, out of those 4 seats put "into play", 3 are Republican seats where their advantage shrinks, and the other was a Dem-leaning seat held by a Republican (Todd Novak in Dodgeville). 2 of those seats are right next to each other (the redrawn 31st and 33rd seats east of Janesville and Beloit) and both are open. The other seat is in the SW Milwaukee suburbs of Greenfield and Hales Corners, and also appears to be open. Might be good targets for Dems to go after in the Fall. The biggest fear you hear from Dems is the possibility of gerrymander 2.0 leading to Republicans grabbing a 2/3 majority, which would enable them to override Evers or any other Dem governor. But if you check the numbers, you'll see that it's going to be very hard for GOPs to reach 66 Assembly seats. Let's go back to the chart, and realize that GOPs would have to take every red dot on here, and the first 5 blue ones.

The "2/3 point" comes in districts that favor Dems by more than 9%, in the college towns of Oshkosh and Stevens Point. And Big Lie-supporting, anti-mask, regressive Republicans aren't putting together any kind of agenda that college students are going to vote for. Nor will highly-educated voters in blue cities like Appleton or Wauwatosa go for that, which would be the next GOP targets if Oshkosh or Stevens Point couldn't work out. Plus, if GOPs are winning those seats, there's very little chance Tony Evers would be winning in 2022, so the "2/3 override" not a scenario that should be thought of too deeply. But what's infuriating with Gerrymander 2.0 is that Dems have even further to go if they want to have a majority in the Assembly to help a re-elected Evers pass his agenda, even if a clear majority of state voters back Dems. If the Republicans really wanted to push for the 2/3 majority in the Assembly, they would have had to put more than just 4 more GOP districts at risk. And they didn't want to do that. So that's a small victory. But it's still an overwhelmingly BS outcome, and means that one bad election in 2010 is likely to hold this state back for the better part of the next 20 years due to the arrogant, backwards GOP "majority" in the Legislature. Despair is not an option, however. That's what the bad guys want us to feel, and have us roll over in November. And giving up ignores the reality that there are opportunities for Dems to grab current GOP districts, given that Robbin' Vos and company got a bit too cute in some places (much as they did in the western and northern suburbs of Milwaukee in the 2010s). Dems in Despair also increases the chance of Republicans being able to capture statewide races in 2022. Gerrymander 2.0 makes those statewide races as crucial as ever, especially since taking over state voting laws and election certification is a central part of the GOP's strategy to steal win back the White House in 2024. Given that it will be near-impossible for Republicans to grab 2/3 majorities to override a Dem Governor, keeping Evers in power would guarantee that the votes Wisconsinites cast for President will count. Which seems like something Dems should remind voters about this year. So use the anger from this crooked Wis Supreme Court decision in a constructive way, and POUND THOSE GERRYMANDERING LOWLIFES.
Posted by Jake formerly of the LP at 7:22:00 PM