16 games and whaddya get? More football!!

When it comes to sports, I get a little perspective as I age, and I don't get surprised from a lot of things any more. But I've still never seen a topsy-turvy season like this Packers' one. But after THAT GAME, the roller coaster has been definitely worth it. 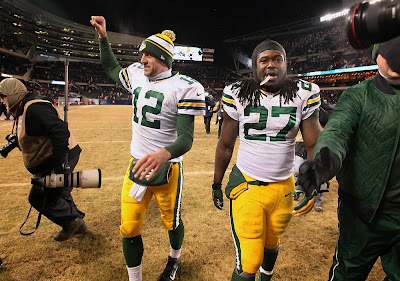 Now I'm very concerned about the pack playing the Niners next weekend. It's the team that seems to have the Packers' number, they seem to be peaking (SF has won 6 in a row and has their swagger back), and between Kaepernick and Harbaugh, there's a whole lotta cockiness to get annoyed with when it comes to San Francisco.

But I'm damn glad that I get to worry about it, instead of have the Packers' season be over. Especially when it comes at the Bears' expense.
Posted by Jake formerly of the LP at 8:18:00 PM