Jobs and claims on the way up in Wisconsin

A couple more jobs-related reports came out here in Wisconsin today, and both gave some insight into where we're going in the months after the time period shown in yesterday's "gold standard" QCEW report (gone over in detail here). First of all, the state released its own monthly jobs report, and it featured a solid gain of 4,000 jobs in the private sector (but only 200 overall due to lower-than-normal winter hiring in local government). October's strong report was revised up even higher, so the state has seen 18,700 additional private sector jobs in the last 2 months, and 15,200 overall.

Manufacturing has also been a source of major strength in the last 2 months, with 9,000 jobs added in that sector since September. It's reflective of a big jump in manufacturing jobs nationwide in the same time period (43,000), and with Wisconsin being one of the manufacturing-heavy states. It might also indicate that employers are ending their BS excuses about a "skills gap" and hiring workers at a fair wage, but we'll need the wage data to make sure on that one. Another big reason behind the good reports has been that workers are being kept on the job longer than normal as the weather cools, instead of being laid off. An example is in Construction, where only 2,600 people were laid off in November, a much lower-than-normal number that translated into a seasonally-adjusted increase of 2,600. The goods sector has certainly been a leader in the last 2 jobs reports, with 10,800 jobs gained overall.

On the flip side, hiring for Holiday shopping season seems to have started slower than normal, as shown by the Trade sector only adding 4,700 jobs, which translated to a seasonally-adjusted monthly LOSS of 6,000. The Leisure and Hospitality sector had larger than usual post-Fall layoffs (10,800), which meant a seasonally-adjusted loss of 2,400. We'll see if there's a snap-back adjustment in December, or if this is a sign of bad things in the service sector.

These good reports have helped to make up for the state's horrible spring jobs reports (punctuated by over 20,000 jobs lost in April), and a weak July-September period (only 1,400 jobs added COMBINED in those 3 months), and now the state is up over 40,000 private sector jobs gained for the year. It's cut into the Walker jobs gap a bit, but the private sector gap is still close to 50,000. 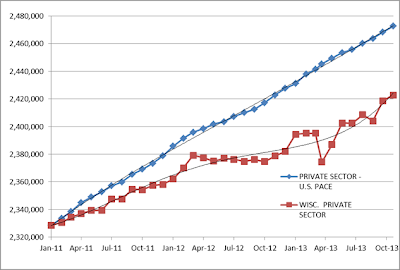 An indicator that this would be a decent jobs report was the lack of increased unemployment claims through the middle of November, as they were running 10%-20% below the amount of claims in November 2012. This has reversed a bit in recent weeks, famously during the week of Thanksgiving, when Wisconsin led the nation in increased claims (partly due to the later deer hunting season). The unemployment claims report that came out today included the Wisconsin numbers for the first week of December, and while it didn't come close to being the largest increase in the nation thjis time, new claims in Wisconsin still rose by more than 1,600 to 16,896. This elevated number is still below last year's totals, but not by much, and if the claims don't drop next week here(they didn't drop much nationwide), they'll start to fall behind December's numbers. 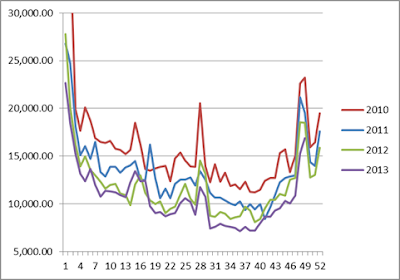 So while it has been a good run in October and November for jobs figures in Wisconsin, it's not looking that promising for December, as claims are starting to run up as the snow starts to fly. It makes the decision by the Wisconsin State Senate to delay Badgercare benefits for 83,000 Wisconsinites all the more cruel, as there stands to be many more people falling below the poverty line in the next few months, but apparently Republicans felt a state with a massive cash surplus couldn't afford to shell out the $23 million it would take to fulfill the governor's original promise to cover that vulnerable group at the start of the year.

Stay tuned tomorrow, as the state-by-state report comes out around midday, and we'll see if the state is starting to get out of its "last in the Midwest" hole that it put itself in for the first two years of Scott Walker's tenure.
Posted by Jake formerly of the LP at 7:45:00 PM