If you look at some of the policy proposals coming out of the Walker Administration, it doesn't sound like anything that's done in the Upper Midwest, an area of the country that traditionally has strong human services. And that's because this Administration's heart isn't with the Midwest and its values, but instead seems in line with that third-world part of the country with high poverty, low incomes and even less hope- the American South.

1. The best example of this is Walker's folly in refusing the expanded Medicaid funds that are part of Obamacare (I've touched on how stupid this is numerous times, most recently here, where I noted a report that said turning down Medicaid funding will cost Wisconsin $1.75 billion in federal funds by 2022). Greg Sargent's "Plum Line" column at the Washington Post pointed out that of the 4.8 million people that may face gaps in their health coverage due to their states not expanding Medicaid, 80% are in the South. Slightly more than half of those people are not white (I'm sure that's mere coincidence), and Sargent relays the findings of the Kaiser Family Foundation, who broke down the states that are and are not taking the Medicaid expansion, as well as identified the backgrounds of the people who would fall into a coverage gap.

Now to its credit, the Walker plan does not have much of a coverage gap, because the state's Badgercare program would cover all Wisconsinites below the poverty line after April 1, and those with incomes above poverty are eligible to get coverage through the federal exchanges. So the only people facing a coverage gap will be those in poverty without children between January 1 and March 31 (unless the Senate refuses to pass the bill this week, then these people would be covered on Jan. 1), but even with that in mind, there are over 160,000 Wisconsinites facing a serious disruption resulting from the delay of being able to finally go on Badgercare, or from families that are barely above poverty being kicked off of Badgercare, and having to get coverage through the federal exchanges.

And this type of health insurance disruption in Wisconsin is happening for no other reason than for Scott Walker to pose against President Obama to try to impress the fraction of a fraction that TeaBag Republicans make up in the electorate. As the Kaiser Foundation's map shows, it is a stance that is completely out of step with the rest of the Midwest, as well as virtually every other state that stayed with the Union in 1861. 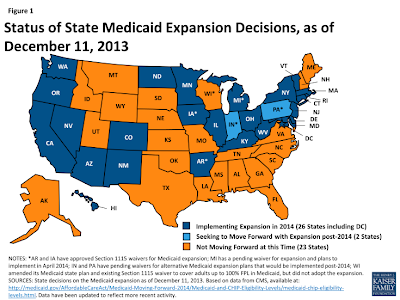 The Kaiser Foundation also mentions that this modern-day "nullification" approach on Obamacare could be a harbinger of longer-lasting effects down the road, much like how the South lagged the rest of the country for decades after the Civil War.

These continued coverage gaps and their varied impacts across groups will result in millions of poor adults remaining uninsured and likely lead to widening racial and ethnic as well as geographic disparities in coverage and access to care.

And this week, Scotty doubled down on the Confederate-style policies, saying his administration was considering "tax reform" measures that could include abolishing state income taxes in favor of higher sales taxes. Obviously, this is an absurd trial balloon, especially since there's no proposal on paper showing what cuts in services or hikes in sales and local taxes would need to be done to make up for the revenue shortfall from getting rid of income taxes. After looking at revenue numbers from the most recent budget, quick math indicates the state sales tax would have to go from 5% to at least 13% to make up for the loss of $7.6 billion a year in income tax. And for a whole lot of Wisconsinites, they pay more in sales taxes than income taxes, so they'd really get hurt by this idea.

The Institute on Taxation and Economic Policy breaks down who pays what taxes in each state every year, and for 2013, its "Who Pays" report on Wisconsin shows that sales and excise taxes take a bigger bite out the wallets of the bottom 60% of Wisconsin income earners than income tax does.

So go ahead Scotty, sell that one to the general public, since a majority of them would lose in this equation, on top of the large amounts of workers that have already lost due to Act 10 stealing their take-home pay, their lower property values, and the worst job performance in the Midwest. Of course, this administration probably isn't too aware of how many people would be screwed over by such a policy, since the only outside input they're allowing on any of these "tax reform" talks are in closed-door meetings with oligarchs, such as the one Lt. Gov Mini-van Rebecca Kleefsich held in Beloit last week.

And it's telling that Walker claims to be "envious" of places with no income tax. Let's take a look at a few economic stats of states with no income tax, compare them with Wisconsin and the rest of the U.S. right now, and see what Walker "envies" about them. We'll even forget the fact that 3 of these states are in the bottom 5 for population, and really aren't close to Wisconsin's demographics in any way.

Seems like the 0% income tax groups holds up OK. Until you get to this stat, which ties in very neatly with Walker cutting people off of expanded Medicaid funding.

But hey, who wants to be ahead of the curve by having 90% of their people insured anyway? Apparently Scotty would rather we be like the states that don't care for their poor and sick, while keeping incomes largely the same, and possibly more susceptible to economic bubbles that burst (as shown in states like Florida and Nevada). Nice priorities, huh?

Then again, Scotty doesn't care about what happens to most of us. He's already gotten his orders, and plans to carry them out any way he can.

And yes, someone from that woman's company was at the closed-door meeting in Beloit with Lt. Gov. Kleefisch. Because that's the way business gets done in "a truly red", Confederate state. As The Daily Beast's Jamelle Bouie so accurately put it today

Of course Scott Walker is looking at eliminating the income tax in his state.

I mean, why wouldn't you turn your state in a laboratory for plutocratic nonsense?