Wisconsin's Comprehensive Annual Financial Report (CAFR) was released on Thursday, and while there's loads of data to go over in this document, I want to narrow in on a few points of emphasis.

1. Ignore all the spin at the start of the document and get into the numbers. On Page 34 of the PDF and Page 29 of the report, the CAFR shows a large budget deficit, based on Generally Accepted Accounting Principles (GAAP).

This in itself isn't a big deal, as we all make payments on things in the present with plans to pay for them in the future, and it looks like good progress has been made, with the GAAP deficit dropping from $2.9 billion 2 years ago to $1.7 billion now, which Gov. Walker was quick to point out (and as a state employee, I say "You're welcome, Governor."). There's only one problem with this situation, and it's that candidate Walkersaid this in 2010.


Require the use of generally accepted accounting principles (GAAP) to balance every state budget, just as we require every local government and school district to do.

Huh, 'magine that, Walker lied to get himself elected. By the way, if you look at that page, Walker is going 0 for 5 in these "reforms", and he certainly doesn't include the addition of no-bid selling of state facilities and turning scores civil service positions into "Governor-appointed hack" jobs.

2. Page 39 of the PDF and Page 34 of the report goes into the state's debt, and it shows the amount of debt increasing in the Age of Fitzwalkerstan.

The total general obligation debt outstanding for the State as of June 30, 2013 was $7.5 billion, as shown in Table 8. During Fiscal Year 2013, $703.3 million of general obligation bonds were issued to provide for the acquisition or improvement of land, water, property, highways, buildings, equipment, or facilities for public purposes or to refund outstanding bonds. Of the bonds issued in the current year, $233.2 million was to be used for University of Wisconsin System academic and self-amortizing facilities; $257.6 million for transportation projects, $19.8 million for energy conservation projects, $61.7 million for environmental programs, and $131.0 million for various other projects.

And as the 2011 CAFR shows, this $7.5 billion is more than 11 percent higher than the amount of debt that the state had 2 years ago.

This 2013 figure doesn't include the $2 billion in added borrowing that the 2013-15 Walker/WisGOP budget has, to help pay for his Koo-Koo tax cuts and other initiatives, so this number will increase as we go along. Not really "fiscally responsible", now is it?

3. The CAFR also goes into economic factors, and these don't look good for Wisconsin, for either the past or the near future. These show up beginning on Page 40 of the PDF and page 35 of the report, and it reiterates that Wisconsin's job growth lagged what was going on in the rest of the country under the first full year of the Walker/WisGOP budget.

With the strong US jobs reports in the three months since August, Wisconsin needs to keep adding jobs at a brisk pace just to keep their jobs deficit at its already unacceptable level. We'll find out if they have later this week when the state's jobs numbers come out, and we'll also have the June 2012-June 2013 Quarterly Census on Wages and Employment come out, which seems likely to keep Wisconsin in the bottom third of the US for job growth.

4. Right after the employment info, the CAFR points out that the state's production and income growth also remain below national average. I also love how the DOA tries to spin this away in the report.

It takes a graph to show what this means, and you'll see that Wisconsin (in blue) had cumulative GDP growth above the nation's in 2009 and 2010 (under Doyle/Dem control) and has fallen behind the US since Walker and WisGOP took over. 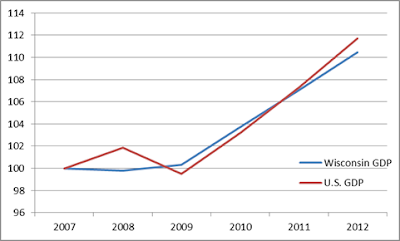 The DOA writers didn't want to let you in on that, did they? The state is also lagging in income growth. These are nominal numbers, by the way, and not adjusted for inflation.

Actually, (nominal, not real) per capita income being up 9.8% over the last 3 years isn't that close to the 11.1% increase in the rest of the nation. It's a rate of growth more than 10% LESS than the national rate.

So the CAFR shows Wisconsin doesn't have a GAAP-balanced budget, we have growing debt, and lagging job, output and income growth. So explain to me how "it's working" in any type of honest analysis? Well, outside of increasing inequality in favor of campaign contributors and FUBARing the state so badly that its services may have to be sold off to oligarchs in exchange for big-time corporate payoffs. Maybe that's the intelligence of Fitzwalkerstan's design, but it sure screws those of us with real jobs and real lives.