Recent US economic indicators looking up, except pay

Two big economic reports out this week show an economy that seems to have been growing through this Fall, with growth possibly picking up. But one key indicator continues to lag, and it explains why inequality is becoming an increasing topic of conversation in this country.

First, 3rd quarter 2013 GDP was revised up to 3.6%. This is the fastest rise in 18 months, and includes good jumps in investment (particularly in residential and non-residential buildings), a narrowing in the trade gap (which helps GDP growth), and even a small increase in government spending for only the second quarter in the last 3 years. It also bumped up the year-over-year increase in GDP to 1.83%, reversing the lower amounts of 12-month growth we were seeing in the first part of this year, and heading back to the 2% level. 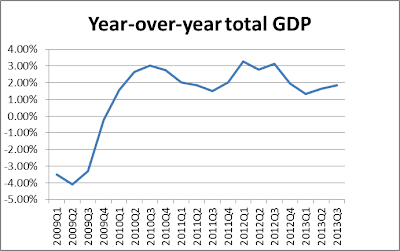 That being said, there are some red flags in the report, most notably that nearly half of the increase in GDP was due to growth in inventories, and that consumption growth dropped to 0.96% in Q3, which was lowest in nearly 4 years. I would assume a lot of that inventory was related to Holiday shopping, and it's worth looking at how well that goes, as it's unlikely that this inventory increase would continue if they can't get the original goods off the shelves. So the reports we start hearing in January about the end-of-the-year retail numbers might drive the direction we're going in for 2014.

Also, the November jobs number came out on Friday, and it was strong all around, with 203,000 jobs created (196,000 in the private sector), and September and October revised up by another 8,000 jobs. In addition, the unemployment rate dropped from 7.3% in October to 7.0% in November, the lowest level since 2008. Most interesting in the report was the 17,000 jobs added in Construction, and 27,000 in Manufacturing (including 6,700 in motor vehicles and motor parts manufacturing). Some of this is simply a reflection of lower-than-normal seasonal layoffs for November (Construction was down 97,000 on the non-seasonally adjusted survey, and Manufacturing was down 3,000), but unemployment claims continuing to drop is still a good sign, and an indicator of the underlying demand for construction that we also saw in the GDP report.

What's not keeping up with these positive jobs and GDP numbers is worker pay. The jobs report also includes average weekly earnings, and these are barely keeping up with the nation's 1.7% Core CPI inflation rate. Here's an example from Page 32 of the jobs report, and note the below-inflation increases in many of the lowest-paying jobs, but also in construction.

I'll also add that the lowest-paying categories are also the areas that have added the most jobs out of the 2.3 million added in the U.S. over the last 12 months. Professional and Business services have added 643,000 jobs over the last year, and Education and Health services is 366,000 of that. Leisure and Hospitality sectors have added 422,000, and retail trade nearly 323,000. So while adding jobs is a good thing, and certainly is a sign of progress, people aren't exactly springing into $50,000-a-year jobs when they do get hired, and aren't getting raises after staying on the job.

That could help explain the low 0.96% increase in Consumption in the 3rd Quarter GDP report, as people aren't going to spend money if they're not making money. It also helps to explain the numerous fast-food strikes we saw last week (fast food is in the Leisure-Hospitality category), and the rise in discussions about U.S. inequality. When the pro-corporate President Obama feels a need to say "The combined trends of increased inequality and decreasing mobility pose a fundamental threat to the American Dream", you know that this issue is reaching critical mass.

Our economy has seen output grow and the number of people working grow consistently for the last 4 years. But we haven't seen enough people end up better off as a result. This is the next challenge that must be taken on, and one that I think the people will not allow the oligarchs on Wall Street and D.C. to ignore.
Posted by Jake formerly of the LP at 11:49:00 AM