GDP shows upside potential, but not booming yet

In between all of the other economic data that came out this week, we received word that GDP for the 3rd Quarter of 2013 got upgraded to 4.1% from the previously reported 3.6%. Combined with the Federal Reserve keeping most of its bond-buying in place, it made Wall Street very happy, and the Dow Jones jumped more than 300 points after dropping much of the month of December on speculation that the cocaine party Fed's easy money policy was ending. It's also heartening to see why the number was revised up.

With this third estimate for the third quarter, increases in personal consumption expenditures (PCE) and in nonresidential fixed investment were larger than previously estimated.

So maybe the purchasing economy isn't slowing down as much as we thought. The revisions also raised the year-over-year GDP increase to 1.97%, and the private-sector GDP increase to just over 3.0%. Those were the best numbers in a year, and could signal that the stall-out of economic growth that we had in early 2013 may be ending. 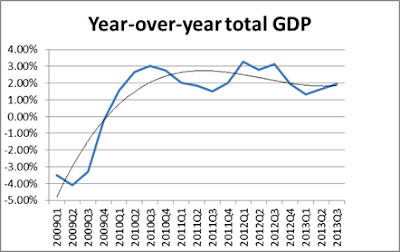 But you'll notice that the trend until this last quarter was for lower growth, and a few other items tell me that prosperity is not yet guaranteed to be around the corner. The last 2 weeks of unemployment claims have seen huge increases, with 379,000 seasonally-adjusted claims last week and 369,000 claims the week before- both numbers well above the low 300s we'd been seeing in recent months. And with the lousy weather in much of the nation over the last couple of weeks, there may be another rise in claims coming. This could put a cap on holiday spending, and might hold down growth rates in the 4th Quarter. Obviously, there are many other moving parts in the GDP equation, but it's worth looking at what retailers are saying in the next month, as the Christmas season is a huge part of the earnings numbers for those types of businesses.

We also need to see if the recent reductions in unemployment benefits from the budget deal is going to compound this problem. If it does, maybe our growth rate decelerates again, and the conversation changes in early 2014. But right now, it feels like the overall economy is starting to pick up again, and the GDP report looks to be a good sign that the post-Great Recession economic upturn will reach a 5th year.
Posted by Jake formerly of the LP at 1:44:00 PM