Higher unemployment claims OK, but WisGOP Scrooges are not


1. I'm going to do a rare thing, and agree with Scott Walker's Administration that there is a legitimate excuse for the bad economic news that came out for Wisconsin this week. It comes from the weekly unemployment claims report, and Wisconsin stood out as Number 1 in a bad way.

And usually, I'd use that as a reason to say "it's not working" and go from there. But the Walker Administration's reasoning for the 4,400+ added claims has some legitimacy behind it.


Officials with the state Department of Workforce Development explain that Wisconsin historically sees a seasonal increase in unemployment claims around Thanksgiving -- in part because of deer hunting -- but note the number of claims for 2013 is actually down from 2012 by 17.4 percent and the lowest since at least 2009. 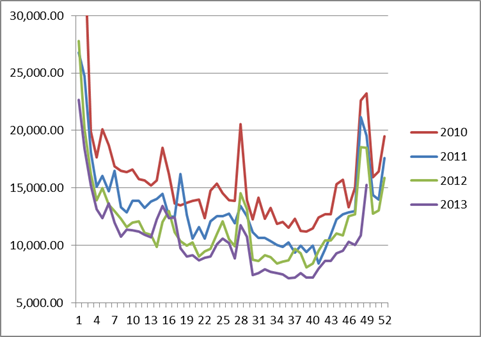 So 4,420 is actually less than in previous years, which makes sense, since the nation as a whole is seeing lower unemployment claims on the order of 10-15% year-over-year. The real test to me is to see what happens with the unemployment claims in Wisconsin for the most recent week, which get revealed next Thursday. The U.S. had an increase in unemployment claims (unadjusted) of just under 150,000 for last week- not too unusual, due to seasonal factors, but it should also raise Wisconsin's unemployment claims in the next report. That'll give us a good indication what the December jobs picture might look like, a lot more than this week's increase in claims will.

On the flip side, this seasonal increase in unemployment claims is what makes the Walker Administration's desire to delay Badgercare for childless adults all the more cruel. Because it is this time of the year when more people lose their seasonal jobs, and would need Badgercare to get by (especially if they were covered in their previous job). It's especially bad because these people previously received notification from the state that they would be eligible for services starting on January 1, and if the Senate agrees to these changes next week, they'll have all of 2 weeks to find out they're going to have be on their own for the next 3 months, and that includes the Holidays. But don't worry, the Walker Administration said today that they have a plan.


Wisconsin health officials plan to call and send letters to all 83,000 childless adults who were originally scheduled to start receiving Medicaid in January but now will have to wait until April under a cost-savings move by Gov. Scott Walker and the Legislature.

The calls will be placed not only to those who thought they were about to receive coverage but also another 80,000 childless adults who have been on a waiting list but earn too much under tighter eligibility requirements set by Walker and the Legislature, said Department of Health Services spokeswoman Stephanie Smiley.

Isn't that nice of them? Poverty-level Wisconsinites will get a phone call and a letter to tell them they're screwed in the coldest months of the year that have the least amount of jobs available (of course, whether the DHS folks will actually reach them is a whole 'nother story). Tell you what, I've got a better idea. Why not accept the Obamacare Medicaid expansion, which would save Wisconsinites' taxpayer dollars, and cover all these people and many more! What a concept!

But OK, I understand Walker needs to do his symbolic "stand in the doorway" move against Obamacare for the right-wing bubble-worlders, and can't accept that. Fine. Here's another option, and it was laid out in State Sen. David Cullen's letter to Walker from a couple of weeks ago that called BS on this plan. All the state would have to do would be to cover the childless adults at or below the poverty level, AND families with children that are currently on Badgercare for the next 3 months. Doing both for 3 months would cost all of $21.6 million to state taxpayers- a drop in the bucket compared to the Medicaid costs, and with revenue numbers coming in strong so far, why can't we do the right thing through the winter months? To ignore that easy compromise should reveal the Wisconsin GOP as the self-absorbed "dollars over people" Scrooges that they are, and should be hung around their necks for the next 11 months, through the 2014 elections.

Given that the State Senate seems to be up for grabs along with the Governor's mansion next year (and the Assembly too, if there's a Dem wave), it would probably behoove GOP State Senators in purple districts to go along with this 3-month compromise. Especially in light of the proposed budget deal cutting extended unemployment benefits, delaying Badgercare for 83,000 Wisconsinites would be a brutal double-whammy in the dead of winter, and is the type of thing that leads people to take our their desperation in very bad ways. I'd recommend that the WisGOP Senators not push their luck on this issue when they meet next week, and work out the sensible compromise....but I bet they won't have the guts to.