Regardless of what reality says, it seems like the big guns in the Wisconsin GOP want to have as many tax giveaways as possible. From Gov. Walker saying he'd like to consider lowering Wisconsin's income tax to 0% while his cabinet members hold closed-door meetings with "business leaders". It also includes Assembly Speaker/ ALEC Cabin Boy Robin Vos hoping to tack on more income tax cuts in the Legislature early next year, somebody at the puppetmaster's headquarters has handed down the orders.

Well, a quick check of Wisconsin's budget indicates that if the state wanted to keep the same amount of revenues coming in (i.e., avoid even further cuts in state aid), the state's sales tax would have to be raised from 5% to 13.5%. So the Wisconsin Budget Project decided to look into how much this would change the amount of total taxes Wisconsinites would pay, and it shows that 80% of us would lose in a "0% income, 13.5% sales tax" Wisconsin, and pay more. 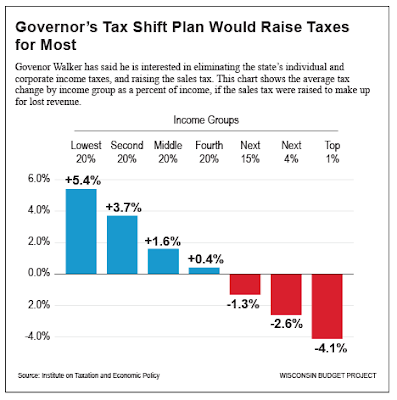 We're not even mentioning that paying taxes "out-of-pocket" (like sales and property taxes) are harder for people to adjust to than never seeing the money in the first place (like income taxes), so this policy is even more negative than it appears, particularly for the lower incomes. But of course, performance and reality have nothing to do with this. Like many other issues, Walker and Vos are merely doing a copy-and-paste of the ALEC agenda. GOP-run Kansas, Louisiana, and North Carolina have all suggested in the last year a similar "0% tax, higher sales tax" combination, and it was shot down once the proposal got put on paper and people could see the real effects of this kind of policy. And none of these states have seen large increases job growth since a modified version of these ALEC laws went into effect (in fact, Louisiana has consistently ranked among the worst economies in the Philly Fed index).

This policy truly makes no sense from a fairness or overall economic outcome standpoint, and is merely an excuse to funnel even more money to the richest Wisconsinites. It would compound what we've already seen in America over the last 35 years, where lowering tax rates on the rich increases inequality, and keeps the average worker's wages stagnant despite growing productivity.

As I showed earlier this week, among the 7 states with no income tax, there is little correlation between that and higher job growth, or higher incomes. The biggest correlation found is that 3 of the top 4 states for having people with no health insurance had no income tax, and given the Scrooge-like policies on Medicaid passed this week by the Wisconsin Senate and signed by Governor Walker yesterday, WisGOP seems to be more than OK with higher levels of uninsured for Wisconsin (we already had the highest increase in the amount of uninsured over the last 2 years).

We're not even mentioning the businesses that would be hurt by the higher sales tax, as they would likely lose customers. You think the giant outlet mall in Pleasant Prairie wouldn't see a major loss when a lot of their customers could get the same items at Gurnee Mills 20 miles away, and pay a whole lot less is sales tax? And it's also worth mentioning that the fastest-growing county with the lowest unemployment in Wisconsin is St. Croix County, right across the river from the Twin Cities. A large number of those people work in the Twin Cities, and it wouldn't take much more to convince them to not want to live in Hudson or the nearby area, given that their property and sales taxes will be going through the roof, taking away a lot of the incentive to stay a further distance away from their work. We already are well behind Minnesota in social policy and economic growth over the last 3 years, so why compound these disadvantages?

By the way, we already have tax cuts going into effect in Wisconsin, the Koo-Koo ones passed in the last budget. Sure, our income tax revenues look good right now, but this doesn't take into account that these numbers are artifically inflated, and not just because of our bubble-isicious stock market. A sizable amount of that 7.1% increase in income taxes is going away in early 2014 because the Koo-Koo tax cuts were so ham-handedly thrown together at the last minute, and the lower tax rates weren't able to be taken out of people's paychecks in 2013. The good part of this is that a whole lot of us will be getting larger-than-normal tax refunds this year, but maybe ALEC Vos should also wait to see just how much revenue drops out of the state's coffers in the first 4 months of this year before we go around asking for more cuts on top of them, and in making people pay more sales tax on anything they might buy with that higher-than-normal tax refund. If only 7% of that income tax increase since July is going to be refunded, we're back to the FY 2012-13 levels of income, and the breathing room that Vos claims makes further tax cuts a viable possibility becomes a whole lot less.

We already know Fitzwalkerstan's tax policy is already very Bush-like, where we blow and borrow away any one-time surpluses and leave us susceptible to massive deficits once the economy has its next downturn. If revenues revert to the budgeted levels over the next 19 months, the Legislative Fiscal Bureau projects we already have a $725 million deficit in store for 2015-17, with the one-time bursts of Act 10 cost moves and cuts in shared revenues to schools and local governments already having been used. Which of course means that if we cut income taxes even further, and economic activity halts to drive sales taxes down further, we'll have little choice but to make massive layoffs and privatizations that sell state assets and services off to private companies for pennies on the dollar.

Oh wait, that IS the ultimate end-game here, isn't it? And that's why we need to step up and kill this zombie, trickle-down idea of 0% Wisconsin income tax in the grave before it rises out of there and starts to eat the brains of the public- and causing a lot more destruction to get rid of the zombies much later.
Posted by Jake formerly of the LP at 11:40:00 AM